Sandra Ruttan Reviews: Things Nobody Knows But Me by Amra Pajalic 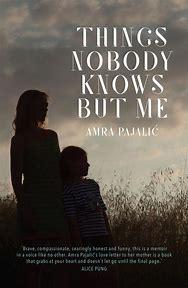 Amra Pajalic's memoir, Things Nobody Knows But Me, is an unflinching look at the formative years of the author's life. As a Bosnian Muslim who spent time living in both Australia and Bosnia before the war, Pajalic looks at the clash of cultures and customs between the homeland of her parents and their adopted country, and how her own experiences shaped her.

Pajalic writes with brutal honesty about growing up with a parent with mental illness, and how this was handled and mishandled by family, friends, and the authorities. The view in Bosnia was harsh and there was little sympathy or real support for those who had mental health issues, while even case workers and medical professionals in Australia failed to effectively diagnose Pajalic's mother.

It wasn't until Pajalic was a teenager that a school counselor introduced her to the term manic depression, otherwise known as bipolar disorder.

Pajalic doesn't shy away from the sense of impending upheaval from each of her mother's episodes and hospitalizations. She is transparent about her own frustrations and how this shaped her experiences as a young child, often burdened with household responsibilities that should have fallen to parents.

From incidents of sexual abuse to her first sexual exploits, Pajalic chronicles her life growing up with cultural and religious conflict, as well as the unending cycle of family problems that shaped her life. I had been looking forward to reading this book for a year, since I first heard it was contracted, because I also grew up with a mom who was undiagnosed bipolar until my late teens. I found that, although the geographic location may have been different, there were so many aspects of Pajalic's experiences with her mother than were similar to mine; namely, that sense of waiting for the shoe to drop as you watched a parent spiral towards another breakdown and the inevitable fallout that would stem from it.

I was also fascinated by the chance to reach across cultural lines and gain insight into the perspectives of both Bosnian Muslims in their homeland, and how things evolved once many were transplanted in Australia. Pajalic's tales of courtship with her husband highlight the realities of an older generation holding on to customs that have evolved in the world they left behind, ultimately creating a generation of immigrants who are out of step with their own homeland because they were extracted from that natural cultural evolution.

The narrative flows through Pajalic's childhood and her journey to adulthood and is at time engrossing, entertaining, and shocking. Pajalic is relatable, and whether she's talking about skipping school, shoplifting candy from a story, making out with a boy for the first time, or the fear of telling a parent you dropped the milk, readers will connect with the story of her journey. I was riveted and squeezed in minutes at all hours of the day and night to finish this book, which I highly recommend.