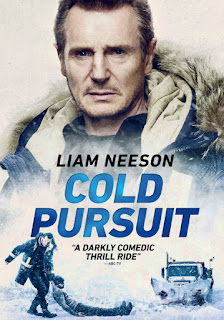 Earlier this week, Scott and I watched COLD PURSUIT. A movie that did not do that well when it hit theaters due to some controversy about various comments Liam Neeson had made while doing promotion work for the movie. Then there was the fact that critics did not much care for it.

Liam Neeson plays the classic traumatized father who seeks out those responsible, one by one, after his son is murdered. Because of toxicology results, the local police believe the kid is just another junkie that predictable overdosed. He wasn’t. Liam Neeson eventually begins to cope with his grief by going after those involved in a bloody and violent pursuit of the kingpin that caused the death of his son. He does so despite being vastly outnumbered and out gunned.

Think a less stylish done version of any John Wick movie and do it in the ice and snow and not the rain. There are also no dogs, no partial or frontal nudity, and no neon. Massive amounts of snow. There is plenty of violence and a bunch of folks get shot and die. Not nearly the body count of a John Wick movie, but they do make a run at it.

The bottom line is that Scott and I liked it. COLD PURSUIT is certainly not the greatest in action films, but after a slow start, it does get going generating plenty of action and a high body count. There is also the occasional dead pan humor which we both enjoyed. One of those films that must not and should not be taken seriously and yet some will anyway because they do that.

If we are doing the old star rating system, the number of guns rating system, the dead body count system, or any other clichéd system where 0 is utter crap and 5 is epically good, call this a 4 and move on. Fun, violent as hell, and easily forgettable.

Netflix Synopsis:
The quiet family life of Nels Coxman, a snowplow driver, is upended after his son's murder. Nels begins a vengeful hunt for Viking, the drug lord he holds responsible for the killing, eliminating Viking's associates one by one. As Nels draws closer to Viking, his actions bring even more unexpected and violent consequences, as he proves that revenge is all in the execution.
Posted by Kevin R. Tipple at 1:00 AM

I was considering renting this yesterday. I'm encouraged by your review.

Hope you enjoy it. I think of it as John Wick in snow without all the style and flash.

I think you and Scott liked it more than Amy and I did. I think we were expecting an action-revenge movie, not realizing at first that it was similar to Fargo in some ways. So I think that threw us.

I never could get into Fargo whether it was the movie or the tv show..