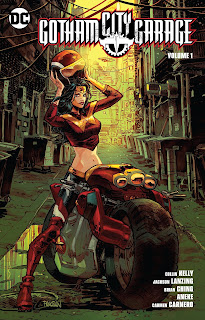 Gotham City Garage: Volume 1 by Collin Kelly and Jackson Lanzing is an “Elseworlds” DC Comics graphic novel. An Elseworlds is a comic book that takes place outside of the prime or main Earth storylines which means that things are very different from the usual various versions of characters found in the main universe. “Elseworlds” series there is the “Red Son” storyline that goes off the idea that Superman was raised in communist Russia. In that storyline, Lex Luther won and took over the world and subsequently turned the planet into a Mad max style wasteland. Humanity is mostly controlled by “ridealongs” that are sort of memory chip implanted in the brains of people to keep people happy and placated. This brutal new world order is enforced by an evil fascist version of Batman that works for Lex Luthor.

Gotham City Garage: Volume 1 depicts a different version of things where all the heroes and villains are bikers. This graphic novel is a tie in to a line of statutes put out by DC Collectibles. This book collects the first six issues by various artists depicting an America in a distant future where the entire country is a wasteland. That is for a special place, a utopia of sorts, named “The Garden.” An action there results in Kara Gordon being forced to flee to the “freescape” that is a desert area fought over by various motorcycle clubs including one known as the “Gotham City Garage.”

The heroes of this story are Big Barda, Zatanna, Harley Quinn, Wonder Woman, and our main protagonist, Kara Gordon aka Supergirl. This version of Supergirl has Kara raised by Jim Gordon who also had his own daughter, Barbara Gordon. While Jim Gordon knew she was an alien and sought to hide her from Lex Luthor, Kara and Barbara had no idea Kara was an alien. Kara begin to figure out something was up when her powers started to manifest during her teen years.

Her powers continue to build while she is on the run in the freescape where she joins the resistance led by various heroes working out of the Gotham City Garage. The heroes use motorcycles as their chief mode of transportation as they wage war against the forces of Lex Luthor who are firmly in control of the last city on the planet.

I enjoyed this Elseworlds tale despite the inconsistent art throughout. Gotham City Garage: Volume 1 is a great place for people to start reading comics or are already reading comics and looking for something different than the norm. Those interested in women as strong characters or heroes will find a lot to like in this book. The read features a solidly good story as well. Gotham City Garage: Volume 1 is a good book.

Material supplied by the staff of the Dallas Public Library System. The copy I received came from the Bachman Lake Branch.