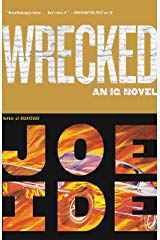 Wrecked by Joe Ide (Mulholland Books, 2018) is the third book in the private investigator series featuring Isaiah Quintabe, known as IQ to his friends. I am just now getting around to reading these books and I understand why everyone raves about them. Early in the book IQ is bemoaning his lack of social connections, and it is more than interest in the case that causes him to accept the request of Grace Monarova, a young artist, to look for her mother who vanished 10 years earlier. He quickly learns that a dangerous paramilitary crew who committed some of the atrocities at Abu Ghraib is also looking for Grace’s mother, because she holds incriminating photos of them. These men are violent and amoral and will kill anyone at any time for any reason at all. The descriptions of their interrogations are sickening to read. It appears to be typical of Ide’s sense of humor to bring this psychotic group to The Burning Man arts festival in Nevada.

There are subplots aplenty, almost too many to keep track of. Dodson, IQ’s sidekick, is now his partner and wants to regularize the firm, collect past due accounts, set up a website, and establish a social media presence. IQ who accepts badly knitted Christmas sweaters as payment for services, is not on board with this approach, and their conversations on this subject are hilarious. Then there’s the creepy knife designer who is in danger of eviction from his store. He decides the only way out is to blackmail Dodson and IQ into stealing a drug kingpin’s bankroll on his behalf, which goes about as well as the reader has come to expect.

The characters are fresh and lively, down to the bickering middle schoolers IQ hires for a small surveillance task. IQ in particular is a likable individual, with his formidable brain, his MacGyver tendency to improvise weapons, and his total lack of business acumen. The dialog veers between snickeringly comic and deadly vicious, often with little transition. The action is relentless in its pacing, making for an exhausting but enjoyable read. Highly recommended.

Booklist starred review. One of CrimeReads Best Books of the Year.