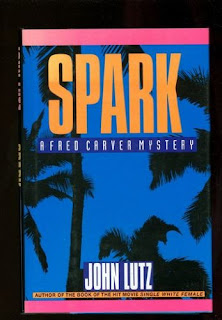 John Lutz has written almost every kind of mystery there is, with more than 50 books and dozens of short stories to his credit. The Private Eye Writers of America have given him multiple Shamus awards, one for best PI short story in 1983 and one for best PI hardcover in 1989, as well as the Shamus Lifetime Achievement Award in 1995. He received an Edgar from the Mystery Writers of America in 1986 and has been shortlisted many times for more Edgar and Shamus awards.

He started out writing private investigator stories, first with the Alo Nudger novels set in St. Louis, and then the Fred Carver series set on the west coast of Florida, then branched out into police procedurals and other forms of the mystery. Spark (Henry Holt, 1993) is the seventh title featuring Fred Carver, a former policeman whose knee injury was his ticket to early and reluctant retirement.

When Jerome Evans, declared in perfect health two months earlier, dies suddenly of a heart attack, his widow receives an anonymous note saying the death was murder. The police decline to look into it and instead refer her to Carver. Carver is bemused by the completely self-contained retirement community that the Evans lived in. Shopping, golf, restaurants, medical care, it is all available to the residents of Solartown without leaving the premises.

Carver brings his significant other Beth Jackson, an investigative reporter, in to help research the principals behind Solartown. A little digging turns up the fact that the people who live in Solartown have a nearly 10 percent higher than average death rate. And that nearly all of the homes are purchased on a reverse mortgage plan, such that the houses revert to the owners of Solartown upon the death of the purchasers. Carver wonders if the higher than usual mortality rate and the mortgage arrangements are related. Even so, they don’t explain the anonymous note or the unexpected death of Mr. Evans.

Within a few days, Carver has a visitor that forcibly impresses upon him the need to drop the inquiry. Bruised and shaken, he presses on, only to be nearly run off the road by a runaway Winnebago soon thereafter. The degree of physical punishment Carver endures in this book is amazing.

Solid private investigator fare, definitely a little darker than some PI novels, with a nasty twist at the end. A good strong read for fans of the PI genre and for fans of mysteries set in the Florida landscape.