It has been a tough week physically and emotionally, but I did manage to get a book read for FFB this week. Today I offer you my review of OREGON HILL by Howard Owen. For more reading suggestions, head over to Todd Mason’s Sweet Freedom blog. 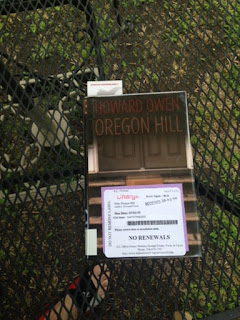 As Oregon Hill by Howard Owen begins, Will is back on the night cop’s beat. He is luck he still has a job at the Richmond newspaper where he has worked for many years. Lucky to have a job and not just because of the status of the newspaper industry as a whole. He is lucky to have a job because his own personal behavior has been pretty rocky in recent years on and off the job. Mixed race with a serious drinking problem, a history of divorce, and a daughter, Andi, who is at the local college with little direction in her life, Willie Black, is a newspaper reporter trying to keep a job in a dying industry. He is very much on old school reporter knowing he is one corporate mandated layoff away from being homeless and without a job. In short, he is as close to rock bottom as he can get, without actually hitting rock bottom.

Isabel Ducharme also attended classes at Virginia Commonwealth University. Andi did not know her directly, but she sort of knew of her through friends. She went to school there until somebody killed her and put her headless body into the South Anna River. It might have gone away with no one the wiser if not for the body getting snagged on a tree branch in the river.

It takes the cops two days to identify the killer who also confesses very quickly. Martin Fell is in police custody and he very well may have done the horrible crime. He is known to have spent time with Isabel in prior weeks and there are witnesses that state they were together and arguing the night she was murdered. He also confessed.

Willie Black thinks it is all wrapped up, but then an ex-wife of his, Kate, who is a successful attorney about to make partner at her firm takes on Mr. Fell’s case. He begins to learn things that indicate Mr. Fell may not have done it. He begins to pursue the idea that Mr. Fell is innocent and that puts him at odds with his newspaper bosses, the police, and just about everyone he knows.

Oregon Hill by Howard Owen is a very good and complicated start to this series featuring Willie Black. Along with the main complicated mystery, there are several secondary storylines featuring the complicated relationships he has with his mother and the current man in her life, his daughter, and various other folks. These secondary storylines are in as much rich detail as the primary storyline, making the nearly 240 page read a meaty one with plenty to work through as the pages pass. Through it all, the main mystery remains in focus to power much of the action forward.

Willie Black is a bit cynical, a bit sarcastic, and at all times a realist regarding everything around him. He sees the windmills, tilts at one or two anyway while being very self aware as to what he is doing, and keeps going forward through his days and nights as best as he can. You can’t ask for much more than that.

Howard Owen is a gem. Since I lived in Richmond most of my life, I'm fond of any series set there and this is one of the best.

Reblogging this over at Buried Under Books.
https://cncbooksblog.wordpress.com/2019/06/15/book-review-oregon-hill-by-howard-owen/