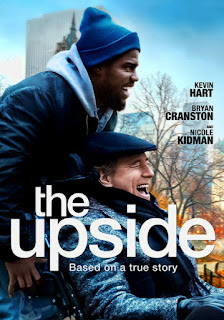 When The Upside was doing the theater circuit, I saw the ads and was not all that interested. I’m not a fan of “based on true stories” type movies. The topic itself looked fairly depressing and I have plenty enough in my own life to be depressed about as it is. I don’t need help.

Then there is the fact that I have never thought Kevin Hart was all that funny. Too often, his jokes fall flat or seem really forced to me. That left Bryan Cranston. I am a fan of his and was glad to see a movie out with him in it.

So, earlier in the week, the movie arrived by way of Netflix and we watched it. For the most part, it was a positive flick, inspiring, and a little funny in various spots. Dell gets just as much if not more from his association with Philip.

Spoiler--A major part of the movie is how Philip goes on, not just because he is paralyzed from the neck down, but because of the loss of his wife to cancer. This sis something I am still struggling very much with every day. Both depressing and inspiring, that part very much connected with me.

All in all, The Upside was a good flick and Scott and I enjoyed it.

Netflix Synopsis:
A recently paroled ex-convict, Dell, strikes up an unusual and unlikely friendship with a quadriplegic billionaire, Philip Lacasse. From worlds apart, Dell and Philip form an unlikely bond, bridging their differences and gaining invaluable wisdom in the process, giving each man a renewed sense of passion for all of life's possibilities.