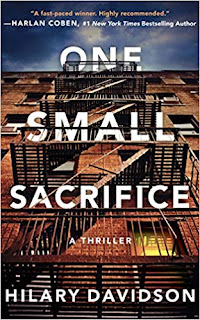 One Small Sacrifice, by Hilary Davidson, offers an intimate look at PTSD and how it affects a person. War photographer Alex Traynor is haunted by things he's seen and experienced, and Davidson uses her insights and skill as a writer to take you right inside his reality. You feel as though you're about to jump through your skin yourself when a car backfires or a slamming door reminds him of the sounds from the war zones he may have physically left, but can't quite exorcise from his mind.

When his fiance goes missing, he becomes the prime suspect. The thing is, he was the prime suspect in the death of a young woman--a friend of his--who plummeted from the roof of his building a year earlier. Detective Sheryn Sterling is determined to get Alex this time for the crime she is convinced he committed.

There are other questions that need to be answered, however. The father of the woman who died at Alex's building has been convinced of Alex's guilt and is dead set on getting revenge.

Turns out that Alex's long-time friend may have some unsavory motives as well, and as Alex tries to stay in control while being pursued as the prime suspect it seems like he's the only one really concerned about finding the truth and saving his fiance.

There's a lot to like in this story; the exploration of PTSD is exceptional and I found Alex to be understandable and sympathetic. This is, perhaps in part, the reason why I found the character of Sheryn Sterling frustrating.

Initially, I really liked Sheryn. I had a good impression of her family and life ... right until she got a new case involving Alex Traynor. Sheryn had been irresponsible enough in the past to convince the father of the woman who'd died a year before that Alex was responsible, and she has blinders on from the first time she hears Alex's name. She is convinced of his guilt, and at this point became, for me, both a common trope and a source of discomfort. As a POC in the story, I felt uncomfortable with the fact that Sheryn so quickly became unlikable and irrational. And she's largely unchecked at work. Perhaps that was exacerbated by her former partner recently retiring and working with a new partner who doesn't know her and is new to the NYPD as well.

I felt uncomfortable enough to have a conversation with POC I know; I was encouraged to abandon the manuscript. Ultimately, I didn't, because I was interested in Alex's character and the central mystery enough to want to see it through and get resolution.

Without giving spoilers, I will say that I was glad I stuck with the book. It doesn't completely mitigate my misgivings about this particular character. I had the impression of someone who was far more level headed than Sheryn was for much of the book, and as the primary POC in the story it didn't sit well with me. I think we're in an era now where we have to carefully consider the portrayal of race. It might have been more palatable if Sheryn had been trying harder to fight her own prejudices and preconceived ideas. The simple reality is, part of the reason she was so convinced of his guilt (his past and something that happened in a war zone) was so explainable that I'd like to think that a good cop interested in the truth would have realized that at the time, and actually pursued the truth, instead of pursuing the information that they could push into the mold of their theory so that they could charge someone they liked for a crime. That's my opinion; your mileage may vary. Sheryn did grow over the course of the book.