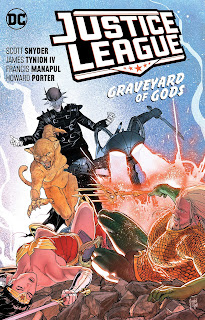 Justice League Volume 2: Graveyard Of Gods (DC Rebirth) by Scott Snyder and James Tynion IV and numerous artists continues the events depicted in the first graphic novel of this series. There is a new Justice League and a new Legion of Doom and both have the same goal of trying to gain control of “The Totality.” This is an energy source that would allow either group to adjust the arc of the universe. Whoever controls “The Totality” and understands it can change the universe fundamentally.

Both sides have cool new bases which mean a new Hall of Justice for the good guys and a new Doom Base for the bad guys.  Some of the cooler moments in this and the previous volume go into showcasing the new bases in detail. Doing that highlights the differences between the teams in stark detail. For example, while the Joker over in the Doom Base has a torture room that he uses on himself for fun (that dude has issues), Batman has a man cave with a giant sticker that says KEEP OUT plastered across his reinforced blast doors. While Superman has an office which even includes a floating dog bed for Krypto (Superman has a dog that is from Krypton also) and pictures of his wife and kids, Lex Luthor over in the Doom Base has a trophy room full of things that could destroy the world. Each thing is sitting in a glass case in his trophy room. 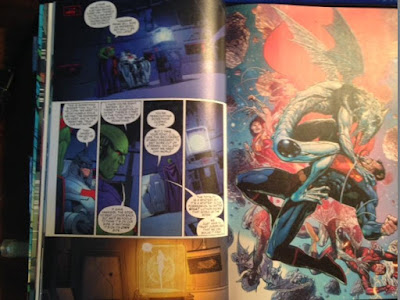 The good guys want to usher in a new age of peace and prosperity which they are calling “Justice” while the Legion seeks to usher in new age under their rule which they call “Doom.” (Yes, I know. So original.)  Lex Luthor has found religion and now believes fanatically that the universe will always turn to evil and seeks to accelerate that process alongside the Legion of Doom. The Justice League for right now has “The Totality.” However, they don’t know what they are doing and the Legion of Doom understands more about it. Getting “The Totality” required Batman to blow up the moon with bombs he had hidden in the moon. Yes, this is not a very realistic take on Batman. This is more of comic book Batman. In the process of securing “The Totality” bad guy Lex Luthor broke both of Batman’s legs and arms and Batman is now confined to armored wheelchair to move around. So, as Justice League Volume 2: Graveyard Of Gods begins, the moon is gone from our night sky, but we have “The Totality.”

In this issue, The Legion of Doom unleashes a group of Dark Gods to drown the world with water. If you touch that water, you become an infected mutant fish monster. So, what we have here is basically a Water World style deal gone way wrong. While the Justice League has sent several members offworld to investigate “The Totality,” it is up to the remaining heroes to fix this problem. So, the focus of this issue is on Wonder Woman and Aquaman with some appearances by Batman, Superman, Flash, and Mera. 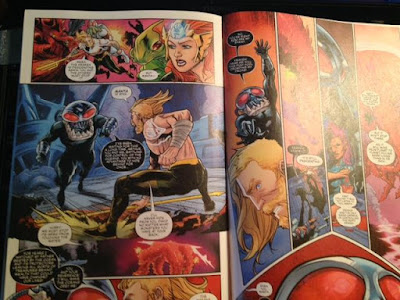 One of the cool parts of this current series in my opinion is the fact that several heroes make cameos during these adventures battling alongside the league. This allows the world to feel bigger and more connected. For example, seeing several heroes having lunch together or saving people alongside each other when they usually never interact reminds the reader that the team is not alone in what they are doing. This is a very different situation than it is for the villains. Another cool cameo deal is Jim Gordon trying to save civilians while having no idea what is going. He makes a comment more than once about how it is just another world ending event in Gotham again this week and that he is so done with this crap.

The action is good and several heroes have cool moments. This is mostly a Wonder Woman and Aquaman focused story, but Batman, the Flash, Mera and Superman have their moments to shine. The Justice League battle against a Kracken is a fun moment. The Flash has some of the best jokes in this story while Batman reminds people he has serious trust issues among other problems.  Superman even leads a one man charge against a space monster that is attacking the Earth and in so doing sustains an injury to his eye. This injury causes him to wear an eyepatch with a giant S on it throughout half of the story. That begs the question of where he got an eyepatch with giant S on it during a world ending event.

The heroes have their backs against the wall in this story and things are not looking good at all. The main bad guys in this story are Lex Luthor, Black Manta, Cheetah, and The Batman Who Laughs. The Batman Who Laughs is evil Batman that is from another multiverse called “The Dark Multiverse” where all the fears and doubts from the main universe characters form together to create monsters.

The Batman Who Laughs is from one of Batman’s worst fears as he is afraid that if he ever killed the Joker he night become like him. Lex Luthor and The Batman Who Laughs mostly scheme and discuss their evil plans in this story alongside several other villains, Grodd and Sinestro, and the Joker of the main universe. Black Manta and Cheetah remind the readers throughout that they do not care what happens to the world as long as Wonder Woman and Aquaman die in the process. The world can end for humanity. They don’t care as long as their foes die.

I really liked this story, but there are some flaws. The artwork changes so frequently between issues that it takes the reader out of the story. One of the main ideas of the story is that we are all connected and that we need to embrace those connections and not fear them. Great idea, but at times, it comes across as a little preachy in spots. 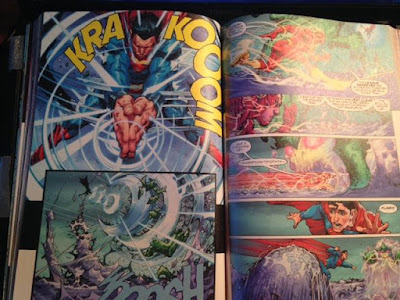 I recommend reading the first volume before reading the second as things would make a lot more sense that way, but you could start here. Readers new to the series may be confused by little things that come along. For example, during a lunch scene, the chef is a Minotaur who is a friend of Wonder Woman. I imagine new readers could be very confused by a Minotaur cooking lunch for everyone. Then there is also a monkey at the bar.  That monkey’s name is Detective Chimp. Yes, the DC Universe has a detective who is a monkey. I personally find that funny. Another surprise for some readers is the deal when a bat is drinking a soda. That is Man-Bat. He is a villain turned hero and not to be confused with Batman. So, some of these little moments I enjoyed and for readers just starting here they might get a bit confused.

I thought it was kind of funny that the Joker wears Batman merchandise shoes in this story. This leads to the obvious question of how he got them.  Did he, for example, go to Wal-Mart and commence shoe shopping while everyone was utterly terrified except for the one weird kid that is always in any store at any hour? Or did some poor guy from Amazon deliver him a package at his evil lair? This issue is not addressed and should have been.

A thing I did not like, but this is more of personal preference, is the continued push to replace Hal Jordan in this series with John Stewart. I prefer Hal Jordan because he has a more snarky attitude while John Stewart is just flat and rather boring. This John Stewart should not be at all confused with the John Stewart of Comedy Central and many other projects. This John Stewart is of African American descent, a former Marine Sniper who has an architecture degree, and is a character that dates back to the 60s. He seems to have only two modes: barking orders or whining about life. In this book, he is whining about having a weird ring on his finger that he can’t get off. That weird ring has given him new powers. Because he has been to space frequently, he goes off world with several other Justice League members to investigate “The Totality” on another planet. Once they head out early in this volume, we never see them again.

During this issue they commence rebuilding the moon. As part of that process, Batman pushes to “weaponize” the moon, but details are sketchy and he loses the argument against the team. I did not like the fact that the book does not go into exactly what Batman wanted to do to protect Earth from Alien invasion and never details how he would have done it. Batman has plans and we are left to wonder what they are as he loses the argument with the team and readers don’t know the why of any of it. 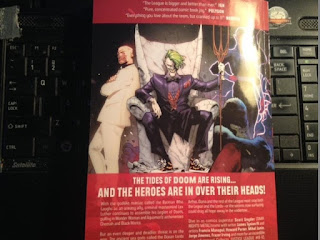 I liked this story a lot, but it embraces the current crazy of the DC universe with the “Rebirth” deal. If you are looking for realistic characters or the traditional cannon, this is not the place to find it. It is a fun read and it does contain some adult language. Several people in this book cuss and that includes Superman. Things are bad when Superman cusses. That will offend some folks and you are warned that it happens.

Justice League Volume 2: Graveyard Of Gods by Scott Snyder and James Tynion IV and numerous artists is a fun read. You should read in order to get the most out of this volume. With the above issues aside, it is a good one and well worth checking out.

Material supplied by the good folks of the Dallas Public Library System. My particular copy came from the Arcadia Park Branch.