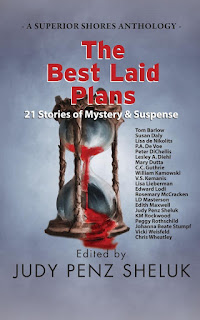 Reviewing an anthology takes far more skill and finesse than reviewing a novel if one wants to make sure that one does not ruin the read for a reader. Short stories are, obviously, far shorter than novels and that means there is far less wiggle room for the reviewer. If one explains too much of the setup of the story, one can mess things up for the reader. Too little and the potential reader is left confused and unsure what he story and ultimately the book is about. Therefore, the goal is to give a brief explanation of each tale without giving away too many specific details that would impact the read.

After an introduction to The Best Laid Plans: 21 Stories Of Mystery & Suspense, KM Rockwood starts the book off with “Frozen Daiquiris.”  Penelope Regenwold intends to be part of the social elite in her new community though the locals have not exactly welcomed her with open arms. As part of her plan, she will host the annual gala for the Ladies’ Society in her new house. She has publicly promised that she and her husband, Mathew, will pick up all expenses. In private she has promised her husband that she will be as frugal as possible. As the time for the party inches ever closer, that part of her plans seems to have backfired a bit.

It is October, 1964 in Toronto, Canada as “Spirit River Dam” by Susan Daly begins. In a few minutes, a certain painting will be auctioned making Imogen Pemberton and Bryan Grace a tidy sum. Much has happened in the last six weeks to get to this point.

Gavoti has to wait until dark to get out of the car and stretch. Planning is everything and Gavoti is not about to screw up now when he is so close to the end. In “Oubliette” by Edward Lodi, his target lives on a very quiet street. After three weeks of surveillance, tonight is the night to go into the home and check it out.

Judge Lu has had a long day of travel and the inn keeper just keeps talking. In “Gambling Against Fate (From Judge Lu’s Ming Dynasty Case Files)” by P. A. De Voe, the travel south down along the Gan River in search of the robbers has been tiresome. The Emperor wants the crimes stopped and Lu has no idea where they are or whom among the locals he can trust. At least he knows he can fully trust the three men in his entourage traveling with him. A good night of sleep for all is desperately needed.

A birthday party for his niece, Florence, is a bit awkward for everyone in “The True Cost Of Liberty” by Chris Wheatley. It was that way before his estranged wife’s new guy, Isaac, starts talking about some old coins he had found buried under some stuff up in the attic. He knows the narrator is a collector of sorts and wants his opinion on one of the coins. That coin could be worth millions and would be just compensation for all he has been put through in recent months.

Killing somebody while doing food prep at a nursing home was not the original plan in “Deadly Dinner” by LD Masterson. The pay isn’t that great, but there are some fringe benefits including the fact that the place is nicer than his apartment. He also can figure out a way to make some real money.

Miranda is doing her best to hang onto her marketing job, but her ways are not what her young boss is looking for at all. In “Fire Drill” by Lisa De Nikolits, she does her best to stay under the radar and cope even when the fire alarms are sounding and her boss should end the meeting and evacuate.

The brothers, Seth and Aaron, have a plan to get out of Diamond, West Virginia. They want to escape a bleak future of working in the coal mines. In “Heirloom” by Tom Barlow they play it cool and refine the plan. The time will come to act.

Big sister Marnie was the family golden child and momma always loved her more. In “The Cookie Crumbles” by Peggy Rothschild, a plan is baked and put into place. It will be delicious on so many levels.

Edith Maxwell’s “The Stonecutter” comes up next where Fernando Andrade has caught the eye of the reference librarian. He is the stone cutter, originally from Portugal, and married to a wife who is ill. His presence brings Eleanor alive and she begins to consider many possibilities.

The murder at the legendary Callingdon Mountain Ski Resort has ignited a media firestorm. Celebrity skier Donegal Cain was stabbed while riding in an enclosed gondola tram from the base of the mountain to the peak. He was the sole occupant and the tram car was watched throughout its ascent more than a dozen witness. A true locked room mystery that must be solved in “Callingdon Mountain” by Peter DiChellis.  The police are stumped so the administrator of the resort brings in a private detective to solve the case.

Hailey Fields had thought that author Charles Attlee would be interesting. As his chaperone for the literary event, she had thought he would be a valuable contact and that he would be to provide some guidance for her own literary career. Instead, the legendary author has treated her like his personal slave while being a boor in “Festival Finale” by Mary Dutta. 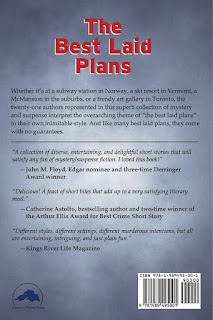 The plan hadn’t been to lose his job, have no savings, and be forced to live in a trailer in a scrub palmetto field forty miles from the coast while working a roofing job in August. Myra, his wife, isn’t much help or support either as she has taken everything that has happened in recent months pretty hard. In “Lunch Break” by Lesley A. Diehl, Ben can at least talk to Ralph about how things are falling apart.

In the aftermath of Hurricane Alex, the Del Ray Police Department is called out to investigate a death at the assisted living community known as “Sunshine Rest.”  Three patients at the facility died during the storm and an investigator from the Department of Children and Families thinks one of the cases is a possible homicide. In “Who They Are Now” by Vicki Weisfeld, Detectives go out to the damaged property to investigate.

It is 8:42 am according to the computer screens Marsha is monitoring as “Thank You For Your Cooperation” by Johanna Beate Stumpf begins. The subway stations she has watch on by way of her monitors seem quiet as the morning rush is over and the tourists are not out and about just yet. Like clockwork her regular traveler arrives minutes later and then he does something new.

Timothy manipulated them so they died as he wished in “Last Thoughts” by William Kamowski. Timothy, at 22, has skills and is quite the computer programmer and hacker. He also likes getting even and proving his point. He isn’t the only one.

Rocco Sakarian did not think too much about the call or the job in Oklahoma. After all, he was in Buffalo where another snow storm was about to hit. A job was a job in “A Sure Thing” by C.C. Guthrie. The prospect of spending time somewhere sunny, clear, and 6o degrees beckoned and he was Oklahoma bound.

It has been three years since Trudy Sullivan’s husband passed away suddenly. After a long period of grief, she has a new look about her in “The Sweetheart Scamster” by Rosemary McCracken. Her financial advisor, Pat Tierney, has serious concerns.

Swallowing a bottle of hair dye is a hard way to go out. Mimi Courvoisier chose that path after deciding she could not live with her hair color. A wig was not an option in “Better Dead Then Redhead” by Lisa Lieberman. The fact that she was a model at the ongoing New England annual hair show will ensure that her death will be blamed on the stylist.

Zach always has ideas and they are always a sure thing. They never work out as planned and Freddy often winds up on the short end of the deal. Freddy has known him since they were kids and he knows what that look in Zach’s eye means in “Sucker Punch” by V. S. Kemanis.

Editor Judy Penz Sheluk closes the anthology with a story of her own titled, “Plan D.” Jenny has a plan and is about to implement it. After all, sometimes the wife has to really push to get her husband to change things for the better.

The Best Laid Plans: 21 Stories of Mystery & Suspense is an entertaining collection of tales that deliver in all aspects. Some plans are destined to fail, some are destined to succeed in unexpected ways, and all are ways of dealing with an issue in ways that should solve everything once and for all.  Much like buying a lottery ticket, these characters are dreaming up ways to permanently solve problems.

Editor Judy Penz Sheluk sent me a digital ARC of the book earlier this year for my use to read and review. Though I was aware of her market call and had planned to submit something, I was unable to get my act together at the time of her call and did not submit anything to the project. If I had submitted something, I would not have reviewed the book.

Thanks so much Kevin. What an amazing review!

Thanks for your review, Kevin.

Kevin, what a thoughtful review! You really I am delighted to be included in this anthology. As you indicated, there is a wonderful range of stories under the one theme of The Best Laid Plans. Thanks for all you do for the short story community.

Thank you for the review!

Thank you so much for this great review! I really loved reading all about the stories! What a range indeed! Thank you very much Kevin!

Such a good job of telling enough to intrigue the reader, but give nothing away. Thanks for the review.

Thank you all. Good book and I was glad to say so.

Thanks, Kevin. Your kind words and diligence are much appreciated.

Thanks for the review, Kevin! I'm pleased to be a part of the anthology, and much appreciate you sharing your thoughts on all the stories.

What a thoughtful review, Kevin. Thanks!

Thanks for the generous comments.
Edward Lodi

Thank you all for entertaining stories. It is easy to write a positive review when each work is a good one. Thank you.

Thanks Kevin, for such an awesome review. And thanks Judy, for getting it all together.