As the heat and the severe weather continue to do their dance here in my part of North Texas, Organized To Death by Jan Christensen recently came up in my Facebook feed by way of the memories deal. It seemed a good time remind you about this first book in the Tina Shaw Mystery Series that I reviewed way back in June 2013. That review is below. For more reading suggestions, head over to Todd Mason’s Sweet Freedom blog. 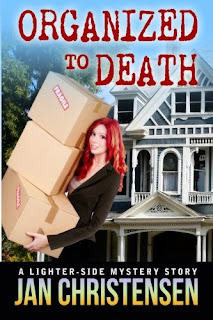 Life was supposed to be less stressful and a bit simpler in the fall of 2007 when Tina Shaw came back home to Newport, Rhode Island. Having given up her psychology practice at age 29 in favor of a new profession as a professional organizer, life should be less stressful with her new career as her clients should not die. Her first job should also be easy, all things considered, as she will be working with a client, Rachel, whom she has known since they both were kids. Rachel obviously needs her help as her house is packed. Clutter has filled every nook and cranny except for the perfect baby nursery that is in pristine condition.

That is except for the dead body sprawled across the floor in a pool of blood with several bullet holes in the back.

Crystal is very much dead and for Rachel the loss is tremendous. Crystal could be over bearing and judgmental, but they were sisters and Rachel loved her dearly. If Rachel already needs mental health help, as Tina suspected considering the stat of the house, she certainly does now. 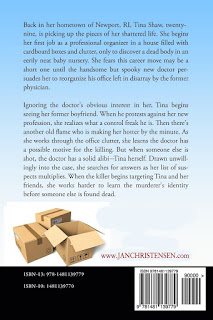 She might not be the only one who needs someone to talk to in Tina's circle of friends and acquaintances. Not only does a killer walk among them, but nearly everyone has a major secret. Some of those secrets unite the characters in various ways, while other secrets will ultimately destroy relationships and cost lives.

Organized To Death: A Lighter-Side Mystery Story by prolific short story and novelist Jan Christensen is a suspenseful page turning read. First in a new series, it features Tina Shaw a complicated young lady with secrets of her own. She also can't get a decent home cooked meal to save her life, has three potential romantic partners who annoy and intrigue her, and the serious unwanted interest of the police who see clear evidence linking her to at least one murder. A rich dynamic character who has yet to find herself, this first novel of a planned series is a tale of personal exploration weaved into a suspenseful cozy style mystery. Rich in detail and populated with complicated multi-dimensional characters in every role, this latest book from author Jan Christensen is another good one.