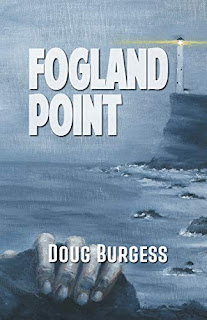 David Hazard returns to his hometown on a peninsula jutting out from the edge of Rhode Island, overlooking the Atlantic Ocean. (It used to be part of Massachusetts but Massachusetts didn’t want it.) He’s responding to a panicky telephone call from his grandmother that references blood everywhere and a body. She doesn’t pick up his return call and the friends that look out for her aren’t answering their telephones either. When he arrives, typical of those afflicted with Alzheimer’s, his grandmother has no recollection of her message or blood or a body.

The next-door neighbor who serves as his grandmother’s unofficial guardian hasn’t brought the evening meal yet so David checks on her to find her dead on her kitchen floor, the apparent victim of a broken shelf of cookware and a cast-iron skillet to the head. He calls the police and the wheels of bureaucracy begin to turn.

With her primary caretaker gone, David agrees to stay with his grandmother for a while until something else can be worked out. The local law enforcement become suspicious of the neighbor’s cause of death and begin to ask questions. David’s grandmother claims to have seen a vehicle belonging to a new town resident outside at the appropriate time but her memory is so unreliable no one is sure what she actually did see.

Then another death occurs, this one unquestionably a homicide, and a full-fledged investigation into events, both past and present begin.

Among the cast of decidedly eccentric characters, my favorite is the kitchen poltergeist who washes dishes and leaves sandwiches on the table. At one point David says he’d pay the poltergeist for its work if he could figure out how. Not a run-of-the-mill story by any standard – highly recommended.