Aubrey Hamilton Reviews: Blood of the Wicked by Leighton Gage 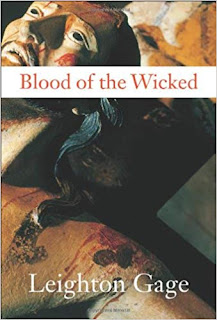 Blood of the Wicked (Soho Crime, 2008) by Leighton Gage (1942-2013) is the first book in the Chief Inspector Mario Silva series set in Brazil, which has seven books published between 2008 and 2014. Gage had a cosmopolitan background, living in Australia, Europe, South America, and the United States at one time or another and traveling extensively in Asia and Africa. His life in Brazil informed this book considerably, in which wealthy landowners control much of what happens in the country. The poor are almost completely prohibited from buying land and therefore lack few opportunities to better themselves, leaving them bound to lifelong poverty. Landowners wage an ongoing battle with those who dislike this arrangement, unhesitatingly killing the most outspoken of the rebels and rarely being called to account.

While bloodshed is commonplace, no one expects a Catholic bishop to be murdered as he arrives by helicopter to consecrate a new church in rural Cascata do Pontal. The bishop had been involved in the fraught struggle between the landowners and the landless. Representatives of both groups were on hand for the bishop’s arrival, and one suggestion was that the shots were actually meant for some of the landowners. Many of the priests sided with the rebels and another suggestion was that the bishop was assassinated by one of them, as shocking as the idea was.

Chief Inspector Silva of the Federal Police is under pressure from all sides to find a speedy yet satisfactory resolution to a case that is nothing less than a diplomatic timebomb. Even after his arrival on the scene, the murders continue, including a reporter ready to produce a career-boosting expose´ and the son of a major landowner. The local police resent his presence. His boss stands ready to throw him to whatever political wolves are unhappy with the outcome. A difficult situation to negotiate but he does so successfully.

Beautifully written with an amazing sense of place and a carefully detailed, executed plot, a fascinating look at another culture. A solid and absorbing read.