Readers should note that this is the second appearance of a book by Catherine Aird in Aubrey’s column here. She previously reviewed A Dead Liberty. I am pretty sure Aubrey is a fan. 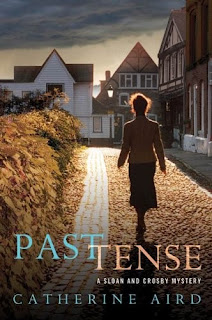 Catherine Aird, who won the Crime Writers’ Association Diamond Dagger Award in 2015, produced about two dozen novels and collections of short fiction about Christopher Dennis Sloan, head of the tiny Berebury CID department in the West Calleshire police force. (In an early book his name was Charles Dennis.) He uses his initials C.D. and is called Seedy by his closest associates. This is a wonderful set of books, written in the tradition of Agatha Christie and Ngaio Marsh, where the puzzle is the main focus of the story. From Sloan’s introduction in 1966 to the present, the characters haven’t changed noticeably, although technology has crept into the story lines.

Sloan’s sidekick is an inept constable named Crosby. Crosby hasn’t learned much since joining the force despite Sloan’s patient coaching. His primary interest is fast cars and his career goal is to join the Traffic department in the Beresbury police force, which has steadfastly declined to have him. They both report to Superintendent Leeyes, who is irritable and often unreasonable. Leeyes attends many of the local Adult Education classes and is prone to quoting odd bits of information from the latest class.

In Past Tense (Minotaur, 2011) Sloan’s twenty-second full-length adventure, he’s mulling over a break-in at a long-term care center where the only loss seems to be a broken vase. The resident of the room recently died, leaving nothing much, so why anyone would bother is curious. Then her grave is disturbed, bringing the police to ask around about a woman who apparently died without friends or family. Sloan has to abandon this question to begin a far more serious case, that of the death of a young woman found in the river. What first appeared to be a suicide quickly changed to homicide. The lack of identity was resolved when a nurse at the local hospital was reported missing. In tracking the nurse’s movements, Sloan found they intersected at one point with those of the dead woman’s whose room was broken into, which folds the two separate investigations into one big one.

Nicely clued, entertaining dialogue, solid plot with several diverting secondary threads. A reader who is watching carefully will pick up a major hint early on. The lawyer and his staff who crop up now and again in this series are great.