Aubrey Hamilton Reviews: Into the Fire by Gregg Hurwitz 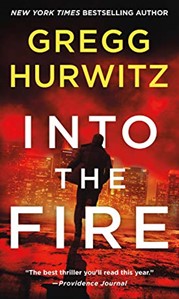 Gregg Hurwitz seems to be settling in to a nice long run with Evan Smoak, the Nowhere Man, formerly Orphan X. Introduced in 2016, readers have been treated to a new adventure every year since. The sixth one was released in late January. I’m catching up on the series and I’ve just finished #5.

Into the Fire (Minotaur, 2020) continues the pattern set at the beginning, where Evan tells each person he helps at the conclusion of the case to give his telephone number to someone else who needs his assistance. Evan takes care to remain untraceable through this number, changing the hosting platform frequently. Hurwitz has a good time with this detail, rotating the site among remote third world countries.

Max Merriweather knows he is in trouble. His cousin has been murdered. He left an envelope with Max to be delivered to a local investigative journalist in the event of his death. Max can’t contact her and someone seems to want to kill him next. Evan opens the envelope and finds a key with no clue as to the lock it fits. He makes a reasonable assumption that it has something to do with the cousin’s work as a forensic accountant for law enforcement and other government agencies.

Evan stashes Max in a safe place and then goes looking for the goons who are after Max and presumably killed his cousin. He discovers there are many layers to this onion. When he thinks he’s found the culprits, he learns there’s another echelon above them in what turns out to be a hierarchy of thuggery, theft, and deceit. To eradicate the kingpin at one level, he arranges to have himself jailed under another name, where Evan displays the ingenuity of Angus MacGyver in creating weapons and tools.

The operational premise underlying the series reminds me of The Equalizer, a fictional covert operations officer retired from an unnamed U.S. government agency who seeks to aid ordinary people. This television series ran from 1985 into 1989. I also hear echoes of The A-Team, another television series that ran from 1983 to 1987, every time I read a reference to Evan’s back story. Similar to Evan, the group is an elite commando force hiding from the U.S. Government in Los Angeles. The A-Team was likewise elusive; the tag line to the show lead-in is “If you have a problem, if no one can help, and if you can find them, maybe you can hire the A-Team.”

Evan Smoak is a fabulously over-the-top creation. Hurwitz writes for Marvel Comics and it shows. Evan is painfully compulsive in his housekeeping, yet deeply kind. He rescues a puppy from a dogfighting ring and then from euthanasia. When the puppy is introduced to Evan’s orderly apartment, Evan learns what many of us have: you can either have a nice house or you can have animals; you can’t have both. His interest in his neighbor and his diffidence in his dealings with her help make Evan believable. Evan is unusually nuanced for a hired killer. The supporting characters are similarly drawn; I especially like the gun dealer. Readers new to the series should start at the beginning to get the full effect. Starred review from Library Journal.