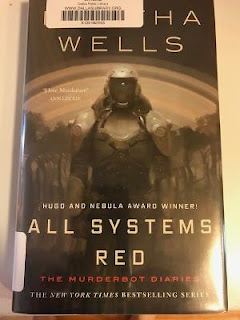 All Systems Red by Martha Wells is the first novella in a series of novellas and at least one book that is part of The Murderbot Diaries. It stars as a security unit that is part robot and part human that calls itself Murderbot. It is an antisocial mix of robot and human that is not fully either. In the far future where everything is run by corporations, Murderbot has a simply defined job. That task is to protect the human exploratory teams that are doing research on unsettled planets. Like most things, contracts are awarded to companies based to the lowest bid so they don’t have the resources Murderbot needs to do her job. When a team of scientists on a planet stop responding to any calls and goes missing, it is up to Murderbot and her team to figure out what happened. The planet is not supposed to have any threat, so where is the team and why are they silent?

This novella is an interesting first work in a long running series. Murderbot is an introvert trying to deal with doing her job and the fact she is not like anyone else. She was built to do a job of a security guard to be embedded with exploration teams. That mix of organic and robot parts has created an introvert that would much prefer to be away from everyone and just watch their version of television. But, she has a job to do and does so in this read that has a nice mix of action, drama, and humor.

I recommend All Systems Red by Martha Wells if someone is looking for something different with a unique protagonist and likes space exploration stories. I am currently on hold at the library for the sequel, Artificial Condition. This read is also a novella.

All Systems Red: The Murderbot Diaries

My reading copy came from the Skyline Branch of the Dallas Public Library System.

Thanks to Scott for a review of this novella. I have had a copy of this for a while, I am glad to be reminded of it. It sounds like a great series to me.

He very much liked it. I thought about reading it, but it was due back to the library so I let it go.