Friday means Friday’s Forgotten books and a treasure map of reading. Today is a repeat of Barry Ergang’s 2015 review of The Burning Wire by Jeffrey Deaver. After you read his review and mosey around here, make sure you head over to Patti Abbott’s blog as well as Aubrey Nye Hamilton’s blog and see what they suggest today.

THE BURNING WIRE (2010) by Jeffery Deaver 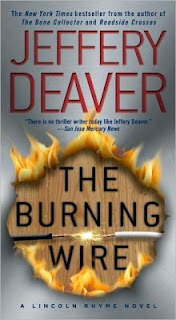 Someone or, perhaps, some terrorist organization has harnessed Algonquin Consolidated Power and Light’s electricity grid as a weapon with which to imperil New York City’s denizens. The first incident results in an arc flash which severely burns a number of victims and which kills another in an especially grisly manner. After that, demands begin to arrive at the office of Andrea Jessen, Algonquin CEO, requiring her to brown-out or completely shut down sections of the city’s extensive power grid, otherwise others will die. Such actions could endanger New York City’s and several surrounding areas’ entire security systems. Because acceding to the demands is an impossibility due to both security measures and time factors, the murderous atrocities continue, the deaths ever greater in number, as law enforcement tries to identify and stop the individual or group behind them.

Called in to consult with the NYPD, the FBI, Homeland Security and, ultimately, to take over the prime investigation, are criminalist/former NYPD captain Lincoln Rhyme and his forensics team: NYPD detectives Amelia Sachs, Mel Cooper, and Ron Pulaski.

Rhyme, a quadriplegic as the result of an accident from his days as an active police officer, now works from his Victorian townhouse, Sachs and Pulaski functioning as his eyes and ears when they are out in the field examining crime scenes or following leads. Abrupt, uncompromising, practical, demanding, and tightly focused, the house-bound Rhyme strikes me as an amalgam of Nero Wolfe, pulp fiction’s Inspector Allhoff, television’s Ironside and Leroy Jethro Gibbs—regardless of whether the author intended any of  this.

Rhyme is partially teamed with Jeffery Deaver’s other series character, California police detective Kathryn Dance, in the pursuit of a murderer known as the Watchmaker, who has been spotted in Mexico. Dance, in turn, puts Rhyme in touch with Commander Rodolfo Luna, whose team leads the trackdown of the Watchmaker.

( Hmm…Rhyme and Dance—sounds like a bizarre new fad or a third-rate vaudeville act. But I digress.) 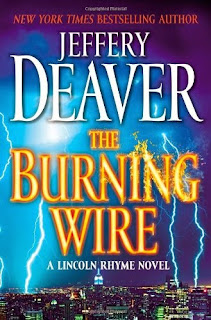 The only other novel by Jeffery Deaver I’ve read is A Maiden’s Grave, which was tense and hard to stop reading, as I still recall after many years, and which I can assuredly recommend. I made it through The Burning Wire fairly quickly, too, though initially I wasn’t sure I’d get through it at all. Divided into five sections, the first is overloaded with forensic investigative technique, terminology and information, and I have to concede that when it comes to crime fiction, I’m something of a Luddite regarding the scientific approach to detection. But recognizing that the nature of The Burning Wire case required such an approach, I stuck with it and, once into the second section, was rewarded with a fairly taut, fast-paced suspense novel (albeit still with a lot of forensics)  that delivered several twists and surprises, and even included some traditional deductive reasoning by Lincoln Rhyme near the end. My biggest complaint is that the characterization was superficial at best.

Warning to squeamish readers: there are more than a few instances of raw and raunchy language in this one, so those who find it offensive will want to steer clear. Those who can handle it and who like so-called “ticking clock” thrillers will probably find this one appealing. As for yours truly, there’s a novel in the Rhyme series that involves an “impossible” disappearance, so it’s highly probable I’ll be visiting this sleuth sat least one more time, as well as reading more of the author's standalones.

Derringer Award-winner Barry Ergang’s written work has appeared in numerous publications, print and electronic. Some of it is available at Amazon and at Smashwords. His website is http://www.writetrack.yolasite.com/  where he is available for your editing needs.