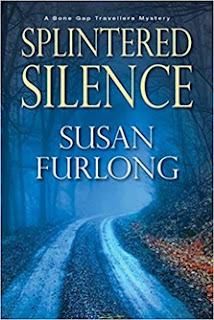 Susan Furlong is a contemporary American mystery writer. She has written two books as Lucy Arlington in the Novel Idea mysteries. Under her own name she published three books in the Georgia Peach series and three books in the Bone Gap Travellers series. The Bone Gap Travellers stories are set in Appalachian Tennessee, where some of the descendants of the nomadic Irish Travellers who immigrated to the United States during the potato famine settled. The Irish Travellers are another of the sects in the American melting pot that, like the Amish, live apart from the greater culture. Furlong describes how she came to meet members of the group in the Author’s Note in the first title in the series, Splintered Silence (Kensington, 2017).

Splintered Silence introduces Brynn Callahan and her dog Wilco. Brynn is a former Marine who served three tours of duty in the Middle East. Wilco was her working dog who served as her partner in searching for dead and injured service members. They were both severely injured when an IED exploded and were invalided out. Brynn has returned to the only home she has ever known in Bone Gap, Tennessee, to help her grandmother as her grandfather’s health fails. Brynn’s mother left her with her grandparents when she was young and she never knew who her father was. Brynn found a home and a career in the military and is at loose ends now that it has ended.

Wilco’s training kicks in on their first day back home and he finds a body in the woods behind Brynn’s grandmother’s house. She meets the local law enforcement representatives this way and runs headlong into the local prejudices against her clan. Her clan members and even her family are suspicious of her, seeing her as part of the outside world. On the other hand, the sheriff urges her to support the homicide investigation in ways that she thinks would betray her family, to whom she feels deep loyalty. These contradictory pulls on her set up an ongoing conflict that Brynn is hard-pressed to resolve.

Brynn veers first one way, then the other as she uses her investigative skills to keep a clan member from being unjustly accused of the murder. Any loud noise sets off her PTSD, and she struggles to keep her attacks hidden from those around her, ashamed of the substantial scarring the IED blast left. A subplot addresses how she interacts with the people she grew up with, contrasting their lives as teenagers and the adults they grew to be.

Other mystery series have made effective use of the culture clash as a source of conflict for their main characters, as Furlong does here. Consider Linda Castillo’s Kate Burkholder, Aimee and David Thurlo’s Ella Clah, and Marilyn Meredith’s Tempe Crabtree for example. A well-plotted mystery and a thoughtful examination of cultural diversity and the ways it is often misunderstood.

I really need to try this series sometime.

Right after I set the post up, I went and put a hold on a copy at the library.