Scott's Take: The Firmament Of Flame (The Universe After Book 3) by Drew Williams 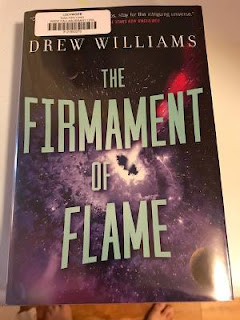 The Firmament of Flame by Drew Williams is the third book in The Universe After Series. I previously reviewed the first book, The Stars Now Unclaimed and the second book, A Chain Across The Dawn. This third book in the series continues the adventures of Jane, Esa, and others as they attempt to figure out the goal of the Cyn. To do this, the Justified operatives of various teams have launched a joint operation to backtrack the route of the Cyn to try and figure out where he came from. Obviously, there are those that will try to stop that. Hopefully find out where he came from will lead to answers. His fellow Cyn and their followers are going to do everything they can to prevent that. This is a journey of discovery type novel and one difficult to talk about without causing spoilers.

This book features a larger cast of characters since Esa and Jane are accompanied by more allies than usual. Everyone has their own personalities and abilities and their own needed skill set. The book is still told from Jane and Esa’s perspectives, however, they have clearly changed a lot over the series. 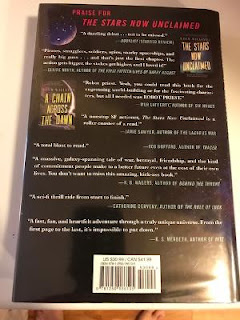 Everything a reader loves about the first two books is present here. Plenty of action, mystery, humor. There is a ton of world building, lore expansion, and set-up. This is a novel that is meant to shake things up and send the series off into a new direction. This book setting up a fourth and, as of yet, untitled and unannounced book. What was originally intended as a trilogy has been expanded beyond what the author originally intended. This series is no longer being marketed as a trilogy.

I highly recommend this series in general and this book. The Firmament of Flame by Drew Williams ties into both books heavily and there are numerous plot points from the previous books relevant here. This series should be read in order.

The Firmament Of Time (The Universe After Book 3)

My reading copy came from the Mountain Creek Branch of the Dallas Public Library System.