Friday means Friday’s Forgotten books and more suggested reading. Today is a repeat of Barry Ergang’s 2015 review of GRIFTER’S GAME, a.k.a. MONA (1961) by Lawrence Block. After you read his review and mosey around here, make sure you head over to Patti Abbott’s blog as well as Aubrey Nye Hamilton’s blog and see what they suggest today. 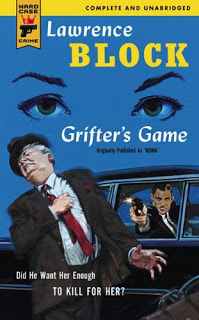 It’s a short novel, so I want to give very little away lest I spoil a fast, entertaining nibble of noirishment by an always-reliable author. It’s narrated by a grifter named Joe Marlin who, when the story opens, has to get out of Philadelphia because the con he tried to pull off fell through and he hasn’t enough money to pay his expensive hotel bill. Thus he takes the train to Atlantic City and steals some monogrammed luggage from the railway station there so he can check into a respectable hotel.

Shortly thereafter, he meets and spends time on the beach with a beautiful young blonde named Mona, who admits she is married to a much older businessman whom she finds “fat and he’s ugly. Also stupid. Also revolting.” When Marlin asks her why she married him, she says he’s “Very very very rich.”

After Marlin returns to his hotel room, he unpacks the suitcases he stole and makes a stunning discovery, one that could be either remunerative or lethal. When he and Mona reconnect (to put it euphemistically) on the beach, both seem to realize that mutual lust has turned into something mutually deeper—even after Marlin realizes who the monogram belongs to and what it could potentially mean for him—and apart from the fact that both agree the monogram’s owner must be eliminated.

Thus the beginning of the deservedly multi-award-winning career of an outstanding writer. See my opening sentence for a recommendation of this particular work. Or ignore it and just read the book.