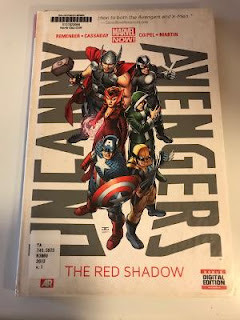 Uncanny Avengers: The Red Shadow (Volume 1) by Rick Remender and Artist John Cassaday is an Avengers and X-Men team title spinning out of the AvX event where those two teams went to war against each other. After the death of Charles Xavier and the imprisonment of Cyclops for his crimes, tensions between the Avengers and the X-Men have never been higher. Mutants are feared even more than they were.

Captain America has realized that the Avengers have not done enough to help mutants so he is putting together a team. A team of representatives from both the Avengers and the X-men who are now trying to work together for a better world.  As he is already team leader for the Avengers, he puts Havoc in as team leader, Havoc is Cyclops’s younger brother and wants to somehow atone for his brother’s sins. Scarlet Witch, Thor who is the God of Thunder as well as Wolverine and Rogue from the X-Men.

Wolverine and Rogue are not dealing with the death of Charles. Wolverine is also trying to come to terms with the fact that he killed his own son to save many other lives. Wolverine’s estranged son was going to murder every single one of Wolverine’s students and Wolverine had to stop him one way or another. 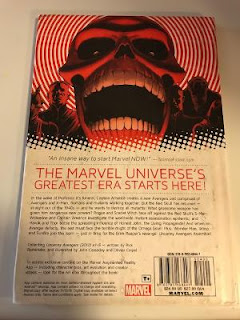 A team in not much more than name only has to face a major threat. The Red Skull has grafted parts of Charles Xavier’s brain into his own brain giving the Nazi telepathic powers. He now, among other things, can even bend heroes to his will. He wishes to use Charles’s Xavier’s gifts to help him turn the American population against the mutant community and create a new Nazi regime. A united team would have a hard time stopping him and this team is anything but united.

Full of action, plenty of character development, and incredible artwork are present in Uncanny Avengers: The Red Shadow (Volume 1) by Rick Remender and Artist John Cassaday. These characters flourish as written by Rick Remender. He clearly has a love of minor details that only super fans of the Marvel Universe would know such as Thor having an addiction to lattes. Despite being written in 2013, a lot of the plot points brought up are still very relevant now. I recommend this book to anyone who loves either the X-Men or the Avengers.

My reading copy came from the North Oak Cliff Branch of the Dallas Public Library System.