If it is spring it must be time to go back to Key West via author Dorothy Francis. This year she takes readers there via her latest cozy style mystery titled Daiquiri Dock Murder: A Key West Mystery. Featuring a cast of offbeat characters, plenty of local culture and a mystery that has more than a few twists the read is a comfortably good one. It also fits well into line with the style and tone of other books generated by this author. 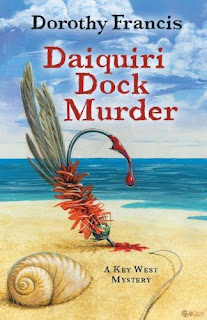 Rafa Blue, who has issues with her mother and sister, is at the Daiquiri Dock Marina as this novel opens. It is a dark and stormy night thanks to a tropical storm that has strengthened to a minimal hurricane and is currently pounding through the Keys. Rafa Blue needs to check the family boat, a cabin cruiser named “The Bail Bond” and make sure it is safely secured in its slip. While the boat is fine, somebody is in the stormy sea next to the boat and in trouble.

Rafa flees back to her car and uses her cellphone to call for help. After calling 911 for help for her friend and dock master Diego Casterano, Rafa Blue returns to the scene and eventually goes into the storm tossed waters for him. Unfortunately, there is no help possible for Diego and the effort puts Rafa into the hospital for a brief time.

Rafa is interesting and has her fingers in many pies. She dreams of writing novel length fiction, currently writes a column for the local newspaper about interesting local people, lives in a hotel and helps out at the Frangipani Room. Not to mention a painful personal history with her family, a boyfriend that wants marriage, and a few other odds and ends. Getting considered a suspect in the murder of her friend Diego means that she has to investigate---something the local police chief surprisingly seems to encourage.

The latest mystery from author Dorothy Francis is another solidly good one featuring strong primary and secondary characters. Several secondary characters in this novel closely resemble characters from other books. Once again, several of the suspects are Rafa’s friends and they all work at an open air restaurant deal that opens around sundown, food is served, and music is played. That background setting is clearly one the author feels comfortable with as it is used again in this novel. There is another “Mama G.” who once again is territorial about music and makes a special kind of food for the patrons. Once again the heroine is conflicted about the intentions of her boyfriend and her feelings, drives a Prius, and has extensively read about psychopaths and sociopaths.

The primary mystery is different and strong in all cozy style aspects. An interesting and complicated case, the classic assemblage of characters to be questioned by the police, and other aspects are all done well.  The constant misdirection as various people in Rafa’s life are considered in the role of the suspected murderer before they either eliminate themselves or are killed removing them from the suspect list also works well. The end result in Daiquiri Dock Murder: A Key West Mystery is another steady and good novel by Dorothy Francis.