Yesterday was an interesting day. For the first time ever, I cut Sandi's hair.  Back before her fifth round of chemo, despite what everyone had told us, her hair started coming back. Slowly it started coming in all over her head with the most around the edges. So, yesterday after she had cut the boys and me, she handed me the clippers and told me to give it a shot.  Made me a nervous wreck as I was scared to death of nicking her but it went okay.

This was the first time in weeks I had touched her scalp and her hair felt nothing like her hair. Strange stuff that cut weirdly and clumped up when touched. Sandi said it reminded her of "dust bunnies" the way it acted. I wouldn't say that, but I don't know how to explain it. It was flat out weird the way it felt and cut, but that must be due to the chemotherapy.  I never cared if she was bald or not but for Sandi having enough hair to cut was a huge milestone in her recovery. She remains convinced, even though there are big setbacks on some days, that the cancer is gone and she is cured. She says she can feel the cancer is gone.

We won't know that until much later this month after she has another PET Scan and then we see her doctor. Sandi always knew she was pregnant with the boys far earlier than the pregnancy tests ever said she was. I hope she is right about this too.

After seeing so many pictures of her at chemo and not feeling well, when Saturday was a good day for her, I took the picture below. 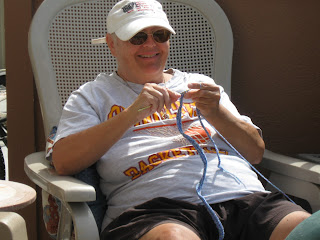 I'll bet she's right this time, too. Hope so.

She better be, Bill! I'm counting on it.

Your post reminds me of my sister's hair that came back after her chemotherapy. It had always been straight and when it grew back, she seemed to have a permanent perm, thick and curly.

That might be what is going on, Randy. I don't know. Her hair was always straight and what is coming in has a swirl to it. Also, when you look down on her head from the top, all her hair is coming in with a counter clockwise swirl to it. They had told us that it would be like what happened to your sister. Whether that is what is happening or she is once again doing something very different I don't know.

Glad you have some positive news, Kevin. One of my friends had the same thing happen as Randy's sister. I know Sandi will just be happy to have hair and be finished with the chemo Blessings on you and your family.

One hopes it really is a sign of things going right, Caroline.