Mark Troy is back today with another installment of his series on the female private detective. This time around he covers Dol Bonner. Make sure you check out the earlier installments of this series as well as Mark’s books and website.

One of the few women that famed misogynist, Nero Wolfe, could tolerate was Theodolinda "Dol" Bonner, a California private eye and partner in the Bonner and Raffray detective agency. We first meet Dol in The Hand In The Glove (1937) by Rex Stout. It is the middle of the Depression. Dol is a socialite whose family has fallen on hard times. She runs the agency with her friend, Sylvia Raffray, another young woman, who is the financial backer of the agency. Dol does the investigating and Sylvia handles the finances. Later on, Dol will take on an assistant, Sally Colt and Sylvia will drop out of the agency. 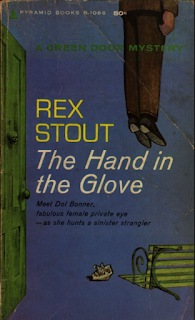 Sylvia is six months shy of twenty-one and Dol, as she reminds Sylvia at one point, is four years older, which gives Dol more wisdom than her friend. Both women are attractive although I find something strange about Dol from the description Stout gives her.

"Hello, Sylvia." That greeting was from Theodolnda Bonner, Dol to a few, from her chair at her desk. The chair might as well have been a stool, for she sat straight without touching the back, as usual. Her curious caramel-colored eyes flashed a glance at her partner and friend from under coal-black lashes—seeming blacker from the cream-tinted transparency of the smooth skin of her rather narrow face.

Is that straight posture something young women learned in those days? Then there’s this. Dol's smooth skin covering her jawbone has a tiny black spot, ". . . not an old-fashioned court plaster decoration, but her natural property and was generally considered a distinction rather than a blemish," which she touches in moments of tension.

Dol has a presence about her that makes people notice her.

Moving, she gave the impression that she was proceeding with the air rather than through it. Unconsciously, seeing her move, or hearing her speak, people settled into their chairs more easily, it was so pleasant to see energy flowing like that with no strain and no interruption of grace.

Dol doesn't care much for men, an attitude that comes out in an argument with Sylvia.

"It must be nice to have a man tell you just what to do." To another person who is in on the conversation, she says, "It will be your turn next to tell her what to do. Stay and admire the virtue of submissiveness." When Sylvia protests that she's not submissive to any man, Dol says, "I don't like men."

Dol's independence streak comes out when she is asked why "a girl of your ability" picked the detective business.

"I know, Martin," Dol sounded patient. "I could have got a job as a stylist or an executive secretary, or started a hat shop or a shopping service. May I just say that I didn't want to? I could add that I wouldn't accept any man as a boss and preferably no woman either, and I made a long list of all the activities I might undertake on my own. They all seemed monotonous or distasteful except two or three and I flipped a coin between detective and landscape design. I had to swallow my pride to take a favor from one man to get a license."

It’s not clear if her dislike of men includes all men in all circumstances, or just those who try to tell her what to do, which would certainly be many. It does not discourage her perennial suitor, a newspaperman named Len Chisholm.

In The Hand In The Glove, Dol discovers a murder and solves it herself, foiling the police. She is not afraid of gunplay and extracts a confession from her suspect at the point of a gun.

The Hand In The Glove is the only novel in which Dol is the protagonist. She plays a major role in the Nero Wolfe novella, Too Many Detectives, and appears in Bad For Business, If Death Ever Slept, Plot It Yourself, and Motherhunt. Wolfe hires her and her agency whenever he thinks the case requires a woman investigator.

Dol has a similar impact on Archie Goodwin as she does on Wolfe. In Too Many Detectives Archie begins his report by saying he is against female detectives on principle. But at the end of Motherhunt he states that Dol and her assistant Sally have made him change his attitude about female detectives.

One novel and a half dozen appearances is not much of a legacy. Dol Bonner is notable because the publication of The Hand In The Glove in 1937, the same year as the first Bertha Cool novel, makes her one of the first women detectives to appear as a protagonist in a novel. 1937 was also three years after the first Nero Wolfe novel, Fer De Lance, at the start of Rex Stout’s long career. Stout was still experimenting with detectives. He does not develop Dol Bonner the way he developed Nero Wolfe, but we can only speculate what he might have done if Wolfe had not been so successful. Would he have devoted more stories to Dol?

The Hand In The Glove can still be found online, in bookstores and libraries. Since it’s original printing in 1937, it has had seven editions, most recently in 2011.  It was made into a television movie by NBC in 1992 titled Lady Against The Odds starring Crystal Bernard as Dol Bonner.

REMINDER---- Writers in the central Texas area might be interested in a workshop on "Women and Crime", Saturday, September 5, in College Station, Texas. More information here: http://www.meetup.com/Brazos-Writers-of-Bryan-College-Station/events/223360417/

Mark Troy is the author of The Splintered Paddle, The Rules, Pilikia Is My Business and Game Face.  His website is at http://marktroymysterywriter.com


Dol seems very interesting, Mark. Her hardboiled, no-nonsense attitude is one we often see in male PI's of that era but not in females. Too bad Stout didn't stick with her and develop her further.