Friday means Friday’s Forgotten Books. Before you go take a look at the complete list over at Patti Abbott’s blog, consider The Julius Caesar Murder Case by Wallace Irwin. Not only did Barry review it today, but Patrick Ohl offered his take on this book back in 2013 for FFB.

Forget about what you know from history lessons or Shakespeare’s drama. Julius Caesar’s demise did not occur as accounts have described it elsewhere. No, it is only through the unremitting pursuit of truth by one Publius Manlius (Mannie) Scribo, ace  reporter and sports columnist for the Evening Tiber, that we know what actually occurred on that fateful Ides of March. It begins with the murder of J. Romulus Comma, a producer at Pompey’s Theater, a crime Q. Bulbus Apex, “city editor and owner” of the tabloidium and Mannie’s boss, does not want Mannie to investigate. Nor do the famous General Mark Anthony, “Julius Cæsar’s dummy Consul, the Administration’s handshaker,” and Chief of Police Kellius. But pursue the case Mannie does, despite opposition from those and other quarters, and in the course of things uncovers a conspiracy to do in Caesar himself. 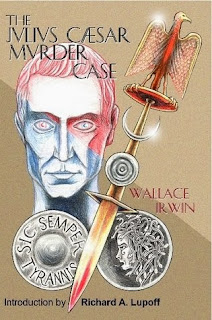 In addition to the aforementioned Caesar and Anthony, Mannie’s investigation puts him into the presence or orbits of significant figures including Cleopatra, Brutus, Cassius, Casca, Cicero, and Caesar’s former wives. Along with his faithful and canny British slave Smithicus, he also encounters the acting troupe from Pompey’s Theater and must contend with his conflicted feelings for the unpredictable Romula, daughter of J. Romulus Comma.

The book is a humorous whodunit. Or, at any rate, is meant to be. But humor is a very subjective matter. While the puzzle and solution were well-handled, and though I smiled and even chuckled aloud in a few spots, I thought the overall result was too self-consciously “cute”—the author’s “Look, folks, I’m being clever and comical!” affectation.

In his introduction to this edition of the novel, Richard A. Lupoff points out that “Through the eyes and in the voice of Mannie Scribo he goes out of his way to lampoon craven editors, ruthless publishers, and Roman politicians,” adding “He also manages to include offensive caricatures of blacks, Greeks, Jews, Britons, gays, Chinese, and little people. If Wallace Irwin was a bigot, at least he was an equal-opportunity bigot.”

If a character in a story or novel uses, whether in thought or dialogue, a racial or ethnic slur, the reader can assume the author wants him to understand this bigoted aspect of that character’s personality. It’s a different matter when the author resorts to such slurs, as Wallace Irwin does, in what are ostensibly objective portions of his narrative. I don’t mean to come across as holier-than-thou; I’m well aware that novels often reflect the attitudes of their times and authors. But I found Irwin’s slurring and stereotyping a long way from funny.

My suggestion is to read some or all of the first chapter at the Ramble House website to decide if The Julius Caesar Murder Case is your kind of mystery. You can read Richard A. Lupoff’s introduction there, as well.

I love RAMBLE HOUSE books and I'm a fan of Roman mysteries of the Steven Saylor variety so THE JULIUS CAESAR MURDER CASE sounds great to me. I'll order a copy after reading your fine review!

Thank you for coming by, George. Hope you like it.