Bad Men by Graham Powell delivers the goods. The cover mentions the fact this collection is filled with “crime stories.” They definitely are crime stories. There are plenty of crimes, some mayhem, and a number of mysteries at work in these seven short stories. Short stories where people do what they do to survive and deal with the world as they see it. 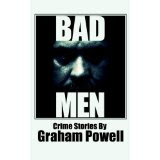 “Grace, Period” opens the book where Tommy Roccaforte is being forced to relocate to an apartment far from where he used to live in Staten Island. Forced to give up his heavy oak and Italian leather furniture along with his old life to move to Tucson, all he has left is his wife Marie. That, a new job in a book store, and his old habits and urges which were not left behind when the Feds relocated him to save his life.

The man known to many as “Duke” for reasons that become clear was tending bar when Steven came in to talk that Wednesday night. Steven is just a college kid and out of place in the biker bar. But, he wants a job done and his money is good in “Payday.”

A job is also a major point in the next story titled “Cold Storage.” Dave Dewberry has a job in mind and wants Al to be involved. It involves a bank, a guy named Eugene Bosco, and the city of New York in its winter time glory.

The setting moves to Kentucky in “The Leap.” Specifically, the Kentucky State Correctional Center at Paintsville where new inmate Kenneth Pennywell has just arrived as the story opens. Assigned to the third room in dorm four, Pennywell has a plan for a certain inmate. The reason why is based on recent events told through flashbacks.

The truck may not be real and the narrator may not be stable in “The Ins And Outs.”  Then again, they really could be after him. He takes his medication and waits knowing if they find him they won’t make him wait long.

Crime Boss Bobby Gianetti was nabbed with a suitcase of money destined for one Tony Lambrusco. How the cops found out and what his bodyguards are going to do about it are a couple of things at work in “Cutting Diamonds.”

“Ken Bruen Is Dead, Alas” is the closing story of the book. A story that has its own story according to the preface. It is all best explained by reading it in the book. This is an incredibly funny read and a real highlight of the book.

Bad Men by Graham Powell is filled with plenty of crime, mystery, and certainly the possibility of  bad men. Ignoring the whole nature/nurture argument, these are seven short tales where the guys involved are doing what comes naturally. Whether or not they are truly bad men really depends on your moral compass …. assuming you have one.

Material was purchased to read and review using funds in my Amazon Associate Account.

I am glad you liked it. These stories were generally a lot of fun to write, and I hope they were fun to read. A couple were the results of challenges - "The Ins and Outs" was a challenge originally issued by screenwriter Paul Guyot, I believe, for a story with an armored car and maybe one or two other elements I've forgotten. "The Leap" was for the second Blog Short Story Project, organized by Dave White and Byron Quetermous.

"Grace, Period" is actually the second story featuring Grace. Both it and "Goodnight Gracie" originally appeared in Plots with Guns, and editor Neil Smith gave me some suggestions that really improved them.

Also, I'd like to say that the cover I made is pretty damn cool. Maybe better than the book.