Monday With Kaye: "First Grave on the Right" by Darynda Jones (Reviewed by Kaye George)

My first thought when reading this review from Kaye George was that this character would be very hard to buy a gift for. She sees dead people, knows every language, and remembers everything that ever happened to her. For any normal guy in her life he is doomed. There is no way she ever forgets anything which means one always hears about what one did wrong that time. It is Monday and once again for “Monday With Kaye” we are given another strange and yet very interesting book to consider.

First Grave on the Right by Darynda Jones

Charley Davidson, a woman who does her name proud, strides into this novel with sass and energy to spare. For starters, she wasn't born as a normal person: she remembers every moment since she left 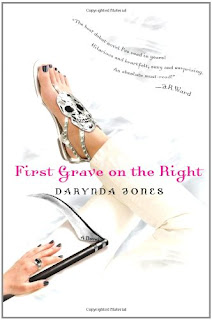 the womb, she knows every language ever spoken anywhere and she sees the dead who are having trouble passing to the other side. In fact, that's where her most special talent lies. She's the portal through which those uneasy dead must pass to get to the good place. She's Darynda Jones' version of the grim reaper.

In addition to her full time reaper job, she works part time tending bar for her Dad's place, has a private investigator business complete with an office and a sidekick helper and is a consultant to the Albuquerque Police Department. This last role is because she assists her Uncle Bob—a homicide cop—by consulting murder victims and letting him know who killed them. When three lawyers who were in practice together all turn up dead at the same time and none of them saw who killed them, she has to dig deeper.

It takes all her talents to survive several incidents—which would have left an ordinary mortal dead—and to worm information out of the living as well as the dead to uncover a nefarious crime ring. All this while surviving the onslaught of the increasingly frequent visits from the dark, smoky, sensual being and getting tangled up in his complicated existence.

It's a fun, sexy, exciting read.


Reviewed by Kaye George, Author of A Patchwork of Stories for Suspense Magazine