Garden of Lamentations by Deborah Crombie (William Morrow, 2017) is the 17th title in a fine British police procedural series that is notable for its consistency.  Duncan Kincaid and Gemma James are acclimating to their new assignments, new locales and new coworkers to size up and fit in with, when they are each pulled into separate investigations. The body of a nanny is found in the private garden of an upscale Notting Hill neighborhood one morning. Because Gemma knows some of the residents, the investigating officer pulls strings to have her assigned to support the inquiry. She learns a lot about the seemingly peaceful neighborhood: a child died in an accident earlier in the year, one of the boys is a promising student in the competitive world of ballet, and residents slip in and out of each other’s houses after dark. 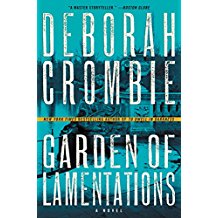 In the meantime Duncan’s former supervisor has popped up again after being on leave for several months. Duncan has questions about his sudden transfer arranged by this supervisor but is mystified by the request to meet with him after hours at a pub well away from any of the usual police hangouts. He is still haunted by the death of a police colleague a couple of months earlier and feels the investigation was closed prematurely. Duncan begins quietly asking questions about this case and others that seem to be linked. When he learns the supervisor was savagely attacked on his way home from their meeting, he uses the attack to delve into a number of cases thought to be resolved and to answer simmering questions.

Crombie balanced the competing plots nicely. Either is sufficiently complex for a book on its own, I wondered why she decided to put both into one book. All of the threads were carefully pulled together though and tied off at the end. I particularly liked the realism in juggling family and work responsibilities. Gemma and Duncan have three children; at least once while out interviewing witnesses Gemma told her colleague that they had to stop soon or she would have to arrange for child care. She was angered by Duncan cancelling his plans with the children when he was consumed with his work, all quite realistic. (Authors who work children or pets into a story and then forget to take care of them lose me as a reader.)

My only complaint with this book, as with many other current releases: I am tired of stories told in different timeframes. Yes, that’s just about the only way to explain a cold case, which is a common theme these days. Yes, the usage in this book is not as annoying as some others I’ve read. However, I was intrigued when I first encountered the device, now I’m not. Just tell the story, please.

This is a long book, over 400 pages, but worth the reading time. Booklist starred review.