Starting today, Jeanne of the Bookblog of the Bristol Library is doing something new. I think it is a cool idea and I think you will too.

In my quest to get steps on my Fitbit, I vastly prefer walking outside to walking on the treadmill, something I resort to only if it’s too hot, too cold, too wet, or too dark to walk outside.  To make the treadmill trudge bearable, I read while walking. This means a book has to be entertaining without being too demanding. If I’d rather walk than read, that is not a good book. On the other hand, if the book is so enjoyable that I end up walking extra steps just so I can read another chapter, then that is a fine book indeed. 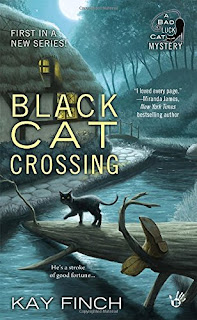 Aspiring author Sabrina Tate decides to take the plunge and quit working a job she hates to focus on writing full time.  The timing seems perfect:  Sabrina’s Aunt Rowe in Lavender, Texas is on crutches after a fall and needs someone to help manage her “Around the World” themed rental cottages, and Sabrina needs a place to stay while she tries to complete her first novel.  It’s a homecoming of sorts, since she’d spent a lot of time there growing up, but apparently missed out on one of the local superstitions about a big black cat who brings bad luck and has been doing so for decades.  Sabrina doesn’t believe a word of it, of course, but when she meets a cat fitting that description she decides she’d best keep an eye out to prevent some trigger happy resident from ridding the town of its “bad luck charm.”

Then the cat leads Sabrina to the body of an obnoxious cousin, Bobby Joe Flowers.  Since Bobby Joe seemed to specialize in making enemies, there’s no shortage of suspects.  Unfortunately, one of the strongest is Sabrina’s Aunt Rowe:   Bobby Joe had just announced that he was the rightful heir to Aunt Rowe’s cottages and he intended to press his claim.

This debut book features a feisty senior citizen in Aunt Rowe, a strong-willed Texas woman who isn’t going to let any conniving cousin muscle in on her business, a mysterious black cat named Hitchcock, and a young heroine who tends to frame events from an author’s standpoint.  The plotting is competent and there is a nice Texas flavor to books.  It was fun seeing Sabrina trying to incorporate parts of reality into the book she was writing, but not so much the fretting about missing her self-imposed writing deadlines.  It just reminded me of all the things I really should be doing other than reading.

I walked both this title and the follow-up, The Black Cat Knocks on Wood.  I’d rate them as “treadmill average.”  They kept me walking, but just as soon as time was up, the book went down and wasn’t taken up again until the next treadmill session.

I will pick up the third in the series, The Black Cat Sees His Shadow, when it comes out in June 2017, and give Sabrina another try.