As Golden Prey by John Sandford begins, Lucas Davenport is now working for the United States Marshals Service. He is also working undercover. He is also a bit bored. The undercover case just doesn’t hold his interest as Lucas has always lived for the hunt. The undercover case is nothing more than role-playing where all the bad actors are known to the cops and law enforcement needed a fresh face that was not known to the bad actors. While Lucas was glad to help out and play a role, it was not a good use of his considerable talents. Hunting down the bad guys, especially the more difficult suspects, is what has always driven him. Working for the Marshals Service, despite the fact he has not had to do a lot of the drudge tasks expected of new agents, has not been what he expected. Even his wife, Weather, knows he is bored. 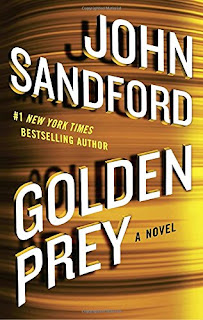 Lucas is about to get a case that will have him on the hunt in a big way. Years ago a man that was on their top fifteen wanted list disappeared and was presumed dead. A known holdup man who once did time in the Tennessee Prison system, Garvin Poole did some bad stuff over the years before disappearing. Based on DNA found at a crime scene in Biloxi, Mississippi ten days ago, Garvin Poole may have been involved. The robbers killed five people including a six-year-old girl at a house used to count drug money.

The current crime and the old but still valid federal warrants on Poole give Lucas and the powers that be plenty of justification for Lucas to go hunting for him and the other folks involved the case in Biloxi. Before long, Lucas is on the hunt for some very bad people who thought they had an easy score and now are on the run. Lucas is not the only one hunting. So too are cartel contractors who are torturing and killing anyone they thinks has info on their ultimate targets.

The latest in the Lucas Davenport series is another thriller style read where most of the bad guys and gals are identified in the first chapter. Moving the action forward from multiple character viewpoints is the main objective here as the days and weeks pass in a case that goes across the Deep South, through North Texas, as well as quite a few other places.

Humor is also occasionally present. Observations about culture in the south as well as life in the North Texas brought out an occasional laugh out loud moment for this reviewer and native Texan. Despite what is claimed in some “reviews” once can find online, the political observations are very few and far between and are always in terms of the context of a character. In short, the comments are what most folks used to understand was a concept known as “character development.”

Golden Prey hums along nicely with plenty of twists and turns, action, and flashes of humor as Lucas Davenport does what he does best--- hunt people. According to the back cover blurb, Stephen King is quoted stating, “’If you haven’t read Sandford yet, you have been missing one if the great summer-read novelists of all time.’”

There is no need to quantify John Sandford on any level or in terms of any season. John Sandford is worth reading every day of the year. Period. While you should have read the series before consuming Golden Prey, if you have not, don’t let that stop you. While there are a few references to earlier events, especially in terms of Extreme Prey, they are not enough to derail those past reads.

My review of the previous book in the series, Extreme Prey, can be found here.