The Return of the Raven Mocker by Donis Casey (Alafair Tucker #9, 2017) 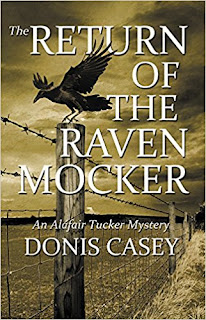 This historical mystery series is interestingly set in the early 1900s in rural Oklahoma. The main character is Alafair Tucker, wife of a farmer and mother of 10 living children. While the premise does not immediately seize most readers -- after all, what can happen in backwoods Oklahoma? – much of the subtext of the books deals with the advance of social and technological change across the country.

The last book All Men Fear Me was set in the beginning of World War I amid the country’s comfortable conviction that the war would be over quickly and would not affect their daily lives. This book talks about events near the end of the war and the Spanish flu epidemic that swept the world during 1918. Alafair’s sons and sons-in-law are overseas and she lives for letters from them. Her daughters are contributing to the war work and raising their own children. When word of the flu outbreak arrives, the small town barricades itself against newcomers and insists that stricken residents stay indoors to try to contain the contagion. Those residents well enough nursed the ill until they too succumbed. During the worst of it, two neighbors die suddenly, Alafair suspects from something other than influenza. When the doctor has time to autopsy the bodies, he agrees.

She investigates when she is not nursing the town’s very sick residents. The book is above all a vivid primer on health care practices of the time and place. Doctors were hard to find and families had to resort to their own nostrums learned from earlier generations and from experimentation. One of the more entertaining parts of the book is the conflict between the highly trained doctor, pulled from his research to help cope with the pandemic, and Alafair, who knows her old-time medications work.

The creep of progress is shown here and there as Alafair uses a newly installed telephone in her daughter’s home and cautiously turns on the electric lights that recently replaced the gas lights. One of the striking aspects of this series is just how well the author depicts a time when news travelled slowly and often inaccurately. In an era of around-the-clock bulletins and information overload, the idea that news was once hard to come by is hard to envision. Highly recommended.