It has been awhile, but Barry Ergang is back today with an all new review for Friday’s Forgotten Books. The timing is also nice as short stories are highlighted during the International Short Story Month celebrated each May. Make sure you check out the rest of the reading suggestions this week over at Patti Abbott’s fine blog. She has a new book out as well so check that out too.

In “Dortmunder and Me, In Short,” his introduction to Thieves’ Dozen, a collection of stories starring John Dortmunder, “a guy who just keeps slipping the mind of Lady Luck,” and who made his debut in the comic crime novel The Hot Rock, Donald Westlake explains Dortmunder’s genesis along with the genesis of the stories themselves, many of which originally appeared in Playboy. 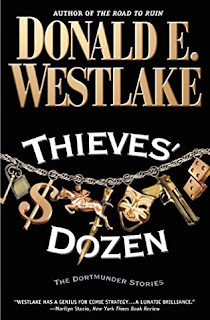 In “Ask a Silly Question,” Dortmunder is forcibly escorted by two plug-uglies to the lavish Manhattan town house of a “60ish, white-haired, white-mustached elegant man” in urgent need of a burglary consultant. When they divorced, the elegant man’s wife thought one of the items she got was a bronze sculpture by Rodin. In fact, she did not. She received a copy her ex-husband had made and was none the wiser. Recent tax problems have compelled her to make a gift of the bronze to the Museum of Modern Art. To prevent the museum’s appraiser from discovering the truth, the elegant man must find a way to steal the extremely heavy sculpture from his ex’s town house. How to do so—and profit from it—becomes Dortmunder’s problem.

Andy Kelp is Dortmunder’s best friend as well as criminous colleague, and it is he who has lured Dortmunder to a ranch in the “darkest wilds of New Jersey” after meeting the “old coot” Hiram Rangle and learning of a potentially profitable scheme. The problem? It involves stealing a race horse named Dire Straits from its rightful owner to cash in on the enormously profitable scheme Rangle’s unscrupulous boss has in mind for himself. Dortmunder is less than sanguine at the entire prospect but allows Kelp to rope him in. Humor is a subjective matter, so there’s no telling whether other readers will grin or even occasionally get a “Horse Laugh” from this one as I did.

The next story finds Dortmunder and Andy Kelp tunneling from the basement of a defunct shoe store to the wall of a bank, on the other side of which is the vault they hope to deplete of funds. They succeed in breaching the wall, only to discover the vault is crowded with bank employees and customers. Learning they’ve been herded there by five ski-masked, Uzi-toting men, Dortmunder claims that he and Kelp are cops who’ve come to rescue the captives. But before they can get them into the tunnel, three of the robbers enter the vault, the apparent ringleader announcing, “Gotta have somebody to stand out front, see can the cops be trusted.” Predictably he seizes on Dortmunder as the go-between. It’s a case of “Too Many Crooks,” albeit one fraught with comical bedlam.

“A Midsummer Daydream” finds Dortmunder and Kelp in West Urbino, New York, having left New York City temporarily because of “just a little misunderstanding down there…a little question about the value of contents of trucks that had been taken…when their regular drivers were asleep in bed. It would straighten itself out eventually, but a couple of the people involved were a little jumpy and emotional in their responses, and Dortmunder didn’t want to be the cause of their having performed actions they would later regret.” So he and Kelp are staying in the country with Kelp’s cousin, a man named Jesse Bohker who is heavily involved in his town’s summer theater program. The theater is currently performing A Midsummer Night’s Dream, the first half of which Dortmunder has endured. He chooses to pass on the second half, so while Kelp rejoins the audience in the converted barn, Dortmunder meanders around outside. He is subsequently accused by Bohker of having stolen over two thousand dollars’ worth of paid theater admissions, and must thus figure out who actually stole the money.

“The Dortmunder Workout,” Westlake explains in the introduction, was commissioned by an editor of the New York Times Sunday Magazine for its Health supplement issue in the spring of 1990. This brief vignette finds Dortmunder at his favorite hangout, the O.J. Bar & Grill, trying to get the attention of bartender Rollo while other regular customers discuss their ideas of various health regimens. Physicians and personal trainers, were they to hear some of this, would never be the same. But they’d definitely get a number of chuckles from it.

Having just looted a jewelry store and then traveled over rooftops to the building in which he now finds himself trapped in its fire escape, caught between cops above and below, Dortmunder is on the verge of giving himself over to the penal system when he notices an open window into someone’s apartment. It’s December and the apartment’s occupant has invited friends for Christmas festivities, so Dortmunder becomes a “Party Animal” until he can get safely away. While contending with the hostess, the caterer, and bickering couple, he becomes very worried when a trio of cops enters and begins eyeballing the attendees.

Having stolen some ancient Roman coins from a numismatists’ convention, most of whose attendees are Arabian, Dortmunder has adopted their indigenous garb—aba, keffiyeh, and akal—only to discover it’s quite ungainly when one is trying to make a hurried departure with the loot. The situation he gets himself into when trying to evade capture compels him to “Give Till It Hurts.”

Valuable coins also play a part in “Jumble Sale,” when Dortmunder has no choice but to seek out Arnie Albright because the regular buyer for this kind of merchandise has recently been re-incarcerated. Arnie is astonishingly self-aware about his many personality defects (as well as his unappealing aroma) and people’s reactions to them. He has barely had time to examine Dortmunder’s coins when his doorbell rings and he admits a couple who have been referred by one “Altoona Joe” and who have a truckload of televisions to dispose of. Dortmunder, claiming to be a visiting cousin, wants only hasty egress, especially when the police arrive, but Arnie is even more astute than Dortmunder could have imagined.

After stealing a brooch which is purportedly worth $300,000, and which superstar actor Jer Crumbie had recently given to his spokesmodel fiancée Felicia Tarrant, Dortmunder is on the subway with the brooch concealed inside a ham sandwich, headed for Brooklyn to see a fence with a reputation for paying high dollar and asking few questions. Considering how many people on the subway are reading the Daily News about the theft, Dortmunder has serious misgivings about having stolen the thing in the first place. When the subway is abruptly brought to a stop just before arriving at the station at which he expects to detrain, his day of anxious aggravation is only beginning, and every subsequent event has him wondering “Now What?” in a very funny tale I don’t want to spoil with further details.

Despite his sobriquet, Martin “Three Finger” Gillie is not bereft of any of his manual digits. He acquired the nickname in prison because of a particular skill. Now a free man, he contacts Dortmunder about a lucrative proposition. Gillie became an artist in prison and now has forty-three canvases on display and for sale in a Soho gallery. He has also gotten “ink”: i.e., an article about his work in the Sunday New York Times. The problem is, he’s only sold two of the forty-three paintings. He suggests a scheme that can get him valuable publicity and many more sales, while Dortmunder can collect money from the insurance company for the return of the stolen paintings. When he cases the gallery and the neighborhood, Dortmunder spots a fellow thief, Jim O’Hara, and learns that Gillie made the same proposition to him. Then O’Hara spots Pete, another Gillie recruit. Suddenly the whole scheme seems odoriferous—and not in a good way. But Dortmunder, O’Hara and Pete are professionals, so they exercise “Art and Craft” to provide Gillie with unexpected ink.

The collection ends with “Fugue for Felons” which, as Westlake alludes to in the book’s introduction and explains further in a prefatory note to the story itself, is and is not a Dortmunder story. Without elaborating on the why of that sentence lest you experience it yourself, I’ll say only that when Morry Calhoun is arrested for robbing the Flatbush branch of a bank, it’s after he has crashed his (stolen) car into the window of the Sunnyside branch of the same bank. Upon learning about this, John Rumsey, a kind of parallel universe Dortmunder, decides there might be something worthwhile “lying around.” So do several of his colleagues, all of whom are acting independently of one another. How the obstacles each encounters before their paths converge, after which more chaos ensues, makes for a very entertaining caper.

The late Donald E. Westlake was an admirable and versatile writer who could keep readers turning pages whether his stories, under his own name or pseudonyms, were hilarious or hardboiled, and many of which, like the aforementioned The Hot Rock, are modern classics. Readers who like their crimes leavened with laughs should seek out Thieves’ Dozens.

While his website is http://www.writetrack.yolasite.com/  some of Derringer Award-winner Barry Ergang’s work is available at Amazon and Smashwords.com

Surprising how little of his short fiction Westlake chose to collect. I hope Abby Westlake and/or such friends as Lawrence Block redress this sooner rather than later.