It was bound to happen sooner or later. This final Friday in May and the start of Memorial Day weekend means the heat is starting to settle in across North Texas. It is only going to get worse for months on end from here. Today also means it is time for Friday’s Forgotten Books hosted by Patti Abbott. We have another treat in store as Aubrey Hamilton has offered us her second FFB review after her first of Coffin Corner by Dell Shannon. After you read her review today, go read her other FFB review from last April, and then go make sure you read all the recommendations over at Patti’s blog. Have a great weekend…stay cool and stay safe! 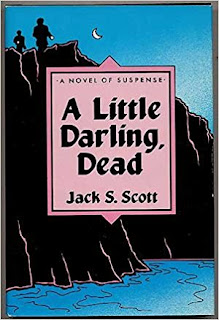 A Little Darling, Dead by Jonathan Escott writing as Jack S. Scott (St. Martins Press, 1986) was one of two mysteries featuring Detective Chief Inspector Peter Parsons, somewhere in central England.  Escott released about 15 police procedurals between 1976 and 1986.
A teenaged girl is found drowned. Still in her school uniform she was clearly on her way home, even if the route was not her usual way to get there. Detective Chief Inspector Peter Parsons looks into the situation, which leans toward a finding of accidental death until a routine search of her room in her respectable home turns up expensive jewelry she could not possibly have afforded. Her friends seem to be withholding information but Parsons and his sidekick Sergeant Wimbush cannot prise their secrets from them.
While mulling all of this over and trying to decide if the case should be closed as the accident it appears to have been, the school is burglarized over a weekend and comprehensively swept clean of anything of value. The school caretaker was known to the police and he was the first person to be asked to help the police with their inquiries. He in turn seeks the support of the local parole officer as well as the alderman who helped him get the caretaker position to begin with. Their subsequent actions make Parsons wonder just what they are up to and when the caretaker is found dead, he has another suspicious death to investigate.
A robust British police procedural by an author not all that well known. The resolution rather galloped toward the end after a somewhat meandering investigation, although perhaps that’s the way events sometime transpire in real life. I was sorry to see there are only two books featuring Chief Inspector Parsons, who is a smart and likeable character. I intend to look up other books by Scott however.