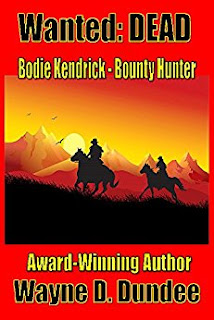 About a half hour ago, Mr. Avery was released from Iron Gate Territorial Prison in the Arizona Territory.  A transport wagon driven by Rudy Haemmler is being used to transport the just released convict to the nearest town of Fordsburg. Mr. Avery has no idea why the four men on horseback on the narrow trail ahead of them want him so badly they have blocked and stopped the transport. While the heavily armed men claim to have been sent by friends of Mr. Avery to escort him for his safety back home to Tonto City their appearance and behavior indicate otherwise.

Things probably would have violently escalated right then and there if not for the timely intercession of Bounty Hunter Bodice Kendrick. Seven years for a manslaughter conviction there are many folks that want Mr. Avery dead as soon as possible. In a twist from his normal paying work as a bounty hunter, Bodie Kendrick has been hired to keep Mr. Avery alive and get him to another town in the area where he has some friends waiting for him.

Easier said than done. Blue Tom Iverson and his men are not going to let that happen easily. And they may not be the only folks in the harsh desert country looking to get Avery and anyone with him one way or another.

Wanted: Dead is the latest in a rich and highly entertaining western series that began with Hard Trail to Socorro. Wayne D. Dundee has created a complex western series where each tales has elements of a mystery at work that also serves to push the tale forward. This read, like the others, features complex characters doing what they must to survive while at the same time plenty of action keeps things moving at a rapid rate. Wanted: Dead, like the rest of the series that is best when read in order, is a mighty good read and strongly recommended.

A word file was supplied by the author several months ago with absolutely no expectation of a review.