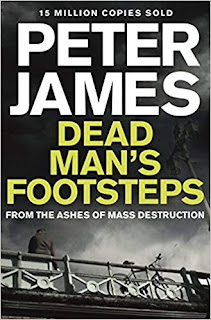 Dead Man’s Footsteps by Peter James (Pan Macmillan, 2014) is the fourth book in the Detective Superintendent Roy Grace contemporary police procedural series. Based in Brighton, significant parts of the book take place in New York and in Australia.

The story opens with Ronnie Wilson in New York City on 11 September 2001, preparing for an important business meeting in the World Trade Center at 10:00 A.M. A meeting that does not take place for reasons we all know. Wilson is up to his ears in debt and uses the terrorist attacks and subsequent chaos to shed those debts along with his identity. The graphic descriptions of the bombings and their impact on New York City and its residents continue to chill, despite the intervening years.

Then the story focuses on Abby Dawson and her terrifying experience locked in a failed elevator for more than 24 hours. Anyone with the slightest bit of claustrophobia will find this part hard to read.

The story flips to DS Grace on a late Friday afternoon in October 2007, in a foul mood over poker losses the night before and made worse by a call about the skeletal remains found at a building site. The subsequent investigation will consume his weekend along with that of many of his colleagues.

The book moves back and forth in time and in place among Wilson, Dawson, and Grace, disorienting and without clear connection for many chapters until the skeleton is identified as Wilson’s first wife, who was believed to have gone to Los Angeles years before. It’s this lack of clear momentum I think that makes the book slow going for about the first third. It seems to pick up steam about then, as Abby’s role begins to take shape and as Grace’s comprehensively explained detective work comes to the fore.

The authenticity of the detailed police procedures is a hallmark of this series, I gather from many reviews. The portrayal of internal department politics, complete with hateful managers and backstabbing peers, is recognizable to anyone who has worked in a large organization. The socially inept detective whom everyone avoids but just happens to be brilliant at his job is also a character familiar to me in real life.

A fine police procedural, after its slow start, that unfortunately requires a more than normal investment of reading time for its 566 pages. It may well be hard to find as this appears to be another series that is not published in the United States. This review is based on the UK trade paperback released in 2014. The original hardback was published by Macmillan UK in 2008.