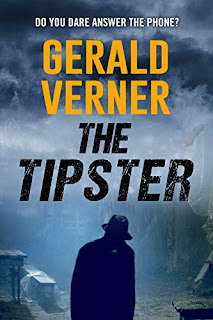 Gerald Verner (1897-1980) was born John Robert Stuart Pringle. He also wrote under the names Donald Stuart, Nigel Vane, Derwent Steele, and Thane Leslie. His literary output was prodigious: More than 120 books, many of which were adapted for films, radio, and stage plays as well as short stories for mystery fiction magazines.

The Tipster (Wright & Brown, 1949) is book 10 in Verner’s series featuring Superintendent Robert Budd of Scotland Yard, Verner’s longest running series character. Budd finds himself searching for a serial murderer who announced via an anonymous phone call his intent to kill five people, starting with Lord Latimer, the Senior Steward of the Jockey Club. (Like Dick Francis, Verner set many of the Budd books in the world of horse racing.) The recipient of the phone call, the editor of the Daily Clarion, believes the call to be a hoax until Lord Latimer is found dead a short time after the call. Even with the killer’s phone call before each successive attack, Budd is unable to prevent more deaths.

Budd is reunited with journalist Gordon Cross and his wife Vicky, who figured in earlier adventures with Budd. Cross is determined to identify the murderer in order to ingratiate himself with the editor of the Daily Clarion to gain a plum job. His headlong pursuit of someone who has already shown he’s willing to take a human life places both Vicky and himself in jeopardy more than once.

In classic Golden Age style Budd and Cross have a nice assortment of suspects to work with. A likely blackmailer lurks on the edges of the case, providing motivation for suspicious activity by some of the characters. The first victim’s adopted daughter had a brother who emigrated to Canada and then disappeared and now can’t be located. The plot hinges on a turning point that would not hold up under current forensic techniques, one of the reasons these 1940s stories are such entertaining reads. Review based on the Endeavour Media ebook.