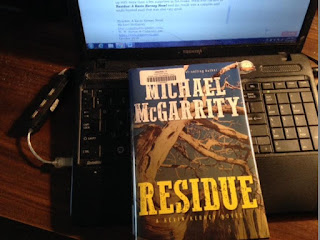 The past has always been a major part of the Kevin Kerney series and is a major piece if not the main theme of the latest, Residue. A novel that serves to tie up several different story arcs that have been present most of the series.

As the thirteenth novel in the series begins, after twenty-eight years of distinguished service Brigadier General Sara Brannon is finally retiring from the U. S. Army. After her latest posting as Commandant of the U. S Army Military Police School and commander of the MP regiment, Sara is finally coming home to Santa Fe and her husband, Kevin Kerrey, and their son, Patrick. Patrick is already on the way back with his grandparents. Once the last formal dinner honoring her is done, Sara and Kevin plan on a few days of fun across the Deep South. The highlight of the trip will be some time in New Orleans before returning to their ranch outside of Santa Fe, New Mexico. For the former Santa Fe Police Chief and Sara it is to be a second honeymoon.

That is until seconds after a warning call from Clayton’s mother, Isabel Istee, when Kevin Kerney is arrested. Placed into custody by military police and local sheriff deputies he faces a charge of murder in the death of Kimberly Ann Ward.

A cold case from 45 years ago, back in the days of Vietnam, Kimberly Anna Ward was a very special woman and a major part of Kevin’s Kerney’s life. College lovers, Kerry had gone to war in Vietnam and come home damaged and self-medicating by way of alcohol. Ward had her own war at home and eventually reconnected with Kerney. That is until one night she ran out from the place he was renting and vanished never to be seen again.

Not only has her body been found, the probable murder weapon was found near her body. A gun that was Kevin Kerney’s long ago and one that he had reported missing at the time. Why the gun he reported missing was found with her is just one of many things he can’t explain all these years later.

While Kerney’s estranged son, Clayton Istee, a Lieutenant on the New Mexico State Police force leads an investigation into the past, everything he turns up seems to indicate Kerney is a killer. Once social media gets ahold of the case, things get worse for all involved rapidly as the 24 hour news cycle unleashes a fury that has Kevin Kerney at the center.

Building off of various plot points and story arcs of previous books, Residue: A Kevin Kerney Novel is a book that not only ties up the past, it implies a way forward as the series will again evolve in a new direction While there are a couple of hints as to what that might be, long time readers know that author Michael McGarrity always comes up with more than a few surprises in his books. Such was the aim in Residue: A Kevin Kerney Novel and the result was a complex and multi-layered read that was also very good.

Material supplied by the good people of the Dallas Public Library System.