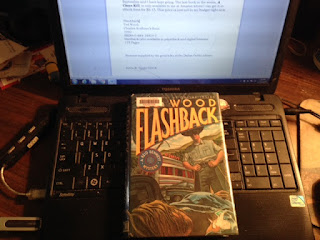 Reid Bennett has been police chief of Murphy’s Harbour in Canada for three years now. That means he knows the locals pretty well and is very much aware of all the young people in the area. He knows that the kids he sees down Main Street are not local. They also seem to be the kind of kids waiting for trouble to happen.

They are and they will be more than once. The bigger issue is the body in the lake. More accurately, the body in the trunk of the car that was found submerged out in the lake. The car was recovered and towed to a nearby garage where the body was later found in the trunk. Moira Waites is the deceased and she had just left her husband, quite possibly for good, the day before.

Whatever future she had has now been destroyed with her death. The spouse is always a suspect and husband, John Waites, is definitely a suspect. Not only because he is the spouse and part of the argument they were having before she supposedly left, his behavior now is a bit off as he seems far more worried about the status of the car, his wife’s friends, and a host of other issues instead of the shocking loss of his wife.

That isn’t all that is going on either in Murphy’s Harbour as a bank robber who promised to get even with Bennett is on the way, and more. The tale is complicated and this installment is a good one.  Flashback is part of a series that should be read in order starting with Dead In The Water. People come and go in this series and the books interconnect making reading in order a good idea. As always, multiple mysteries are at work and there is plenty of action keeping things moving and the pages turning.

Make sure you check out Aubrey Nye Hamilton’s review of Flashback that she did back in August. You can read that review here. Because of her review, I went to the beginning and read the first book, Dead In The Water. That became an FFB review back in September and I have kept going. The last book in the series, A Clean Kill, is only available to me at Amazon where I can get it in eBook form for $6.15. That price is just not in my budget right now. So, things may end here. We shall see.

I was going to suggest you try an ILL through Dallas PL but they charge $3 per item.

I've been intending to get back to this series after all your FFB posts but have not yet done so. I am still two books into the series. I'm also keen on finishing Giles Blunt's Canuck series.

The cover art of the Woods books always reminds me of a Depression era series that Crider mentioned a few times. Set in the Dakotas and written by Harold Adams. https://billcrider.blogspot.com/2009/10/forgotten-books-murder-harold-adams.html

Yes, they do charge now (thanks to the ending of state funding a few years ago) and I have paid it for other books in the series. That deal is not an option on the final book.

Me to on the cover art. The ebook covers do not do the series any favors.

I have not read the series by Harold Adams OR the ones by Giles Blunt.

Awright, Kevin, you've twisted my arm enuf!! I just downloaded the Kindle version of Dead in the Water. So now I've got to read the WHOLE series?