For this final Friday of 2018 Barry Ergang is here to put a wrap on it. Make sure you check out the full FFB list over at Patti’s blog.

FEAR AND TREMBLING (1989) by Robert Bloch 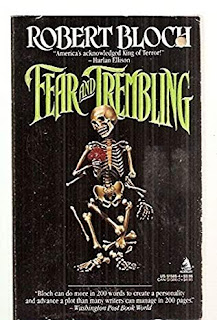 I was 13 or14 when I discovered Robert Bloch, which was when Alfred Hitchcock’s “Psycho,” based on Bloch’s novelistic and—to my mind—Hitchcock’s cinematic masterpiece, was released. There’s no need to detail the circumstances here, but I read the entire second half of Bloch’s novel (prior to seeing the movie) in a room nearly pitch-black save for the lamp in the corner alongside the couch on which I sat. I became a fan from that point on, and over many years have read my share of Bloch’s novels and, especially, short fiction. Fear and Trembling is among the many collections of his latter works. To begin:—

The narrator, visiting Paris, is not there in search of adventure. But an evening’s stroll results in his being accosted by a bunch of young boys. When they finally leave him alone and run off, he discovers they’ve lifted his wallet. He subsequently learns they’re known as “The Yougoslaves,” victims of human trafficking who have been trained by adult masters to commit these kinds of crimes. The wallet contains an item far more valuable to its owner than money or credit cards, so when it becomes apparent the police will do nothing, he sets out on his own to recover it—but with drastic results for whom?

Hilary Kane knows London intimately. “Over the years he strolled the pavements, reading the city sentence by sentence until every line was familiar; he’d learned London by heart.” On this particular day when he, strolling with his friend Lester Woods, comes upon an antique store that shouldn’t be where it is, he’s compelled to enter and examine its wares, among them an apparent medical kit Kane is determined to have regardless of cost. Woods subsequently learns that Kane is a student of the crimes of Jack the Ripper, and that the original owner of the kit might have been the Whitechapel slayer. Neither can foresee what becomes “A Most Unusual Murder.”

“What unnatural life had festered and flourished here in the black bosom of earth?” Such is the question that disturbs the nameless narrator, who has sailed from New York to Cornwall, England, to visit his old friend Malcolm Kent. Both men are fascinated by legends and folklore. Malcolm tells him of a discovery he’s made that proves ancient Egyptians visited England. Soon both men make the descent deep into the earth where they encounter “The Brood of Bubastis.”

Only a few minutes after starting his writing job at the film studio, Joe Considine finds himself unemployed thanks to script prohibitions from the Anti-Amusement League. At the unemployment office he meets the lovely Sandy Simpson, to whom he offers a ride to what will soon become his new home. On the way, an accident that luckily isn’t fatal results in them meeting the friendly alien Drool, whose mission is to conquer Earth. Considine, once he discovers Drool’s extraordinary talent, has a much better way for him to realize his conquest. Far from the kind of story that aptly suits the title of this collection, “Groovyland”—which was first published in 1969—is a comical sci-fi tale loaded with punning and cultural prescience.

A film fan since childhood, Dale ultimately comes to teach film history at the university level. When he decides to lease an out-of-the-way cottage in the Hollywood Hills the realtor refers to as “the Chaney house,” he and his girlfriend Debbie have a falling-out, Debbie wanting to share a more fashionable new condo with him. But the idea of living in a home possibly once occupied by silent film star Lon Chaney, whom Dale reveres and intends to write about, is irresistible. The nightmarish aspects of the move begin when he comes upon “The Chaney Legacy,” a makeup kit that’s much more than it first seems.

More poignant than horrifying is “Floral Tribute.” Until he was six, when he was taken away from Grandma and placed in an orphanage until he went into military service, Ed previously lived with her in the house directly behind the cemetery. It’s now twenty years later and Ed, hospitalized with a war wound, is desperately trying to recall this nearly forgotten time of his childhood when he receives a letter from Grandma. Once he’s received his medical discharge, it’s time to go home to find out if so-called figments are indeed figments or realities.

Lifelong loner and writer of fantasy fiction of the darker variety, Ross is somewhat obsessed by Death with a capital D. His sixty-fifth birthday only serves to reinforce the obsession. When he meets Death in what may or may not be a dream, in which the sands in the hourglass of his existence are about to run out, he reluctantly assents to a bargain that will keep him alive: for every person that he kills—for whom he’s the “Reaper”— he’ll gain an additional year of life. With the passage of a few years and some unintended lives resulting in emotional setbacks, Ross seems able not only to defy but also to destroy Death.

Thirty-year-old psychiatrist Dr. Degradian is almost instantly smitten by twenty-year-old Angela when she enters his office for her first appointment. Her problem? She can’t get any sleep because of the incubus who visits her nightly and has his way with her all night long. She insists she’s not dreaming. Degradian’s initial efforts to help this lovely young woman who, he’s certain, is hallucinating, do not succeed. She then consults her priest, but his exorcistic efforts lead to other difficulties, so she returns to Degradian for help. I’ll say no more about “The Shrink and the Mink” other than that it is, far from horrific,  hilariously risqué, Bloch indulging his love of wordplay to a degree that might have you laughing out loud as it had me more than a few times.

Albert Kessler is a man driven to make “A Killing in the Market.” Formerly a clerk in a Wall Street brokerage house, he has carefully followed the successes of Lon Mariner, a man who has made millions from shrewd investments rather than from slapdash gambles. Kessler quits his job and, having tracked Mariner’s movements, goes to Chicago to try to meet him “in hopes that I’d get him to cut me in on his big deal.” He checks into the same hotel Mariner is staying in, discreetly inquires about him to various personnel, and eventually meets him in the hotel bar. But after Mariner leaves the bar with a tall blonde, he disappears, and suddenly nobody Kessler has previously spoken to remembers him, nor is his name in the hotel register.

Late-night TV talk show host Harry Hoaker came up the hard way, but has had a very successful career competing against the likes of Johnny Carson. What the public doesn’t know about his secret issues needn’t be aired and, besides, it’s “The New Season.” But as he once again faces the lights, camera and audience, and as untoward things begin to happen he begins to glean the nature of, Harry must decide whether to say anything about them to his viewers.

In “ETFF,” an alien who has adopted human form promotes a ride to the World Science Fiction Convention, thanks in part to the titular Extra-Terrestrial Fan Fund, where he/she/it (gender never specified) creates undesired and unexpected chaos in another comical story that proves the title of this collection is a misnomer.

The placard, which has been posted by the bearded man named Fall on every telephone pole in Goober City, reads Carnival of Life. The Greatest Show on Earth. Adults Only—Fairgrounds, Tonight. When the local citizenry arrives in droves that night, they find only one tent—and that not terribly large. First they’re treated to verbal teases about the visuals on banners hung on the tent’s outer canvas walls. But then they’re allowed to go inside for the actual “Freak Show.”

The unnamed narrator is a retired professor of criminology and sometime consultant to the police department. When he begins to study the natures of the grisly murders, each of which involves the severance of a victim’s body part and a key aspect of each victim’s history, he’s certain astrology plays a part in the serial killer’s twisted motive. His ultimate confrontation does and does not fit into the chart of a “Horror Scope.”

Despite what I wrote in the first paragraph and several story descriptions, it’s been a long time since I’ve read much in the way of what Tor Books, in its cover classification of Fear and Trembling, rates as horror fiction. I’d personally call it a collection of horror, science fiction, fantasy, and crime fiction. Debate designations as you will—or won’t—I can easily recommend this as good entertainment.

Derringer Award-winner Barry Ergang’s mystery novelette, The Play of Light and Shadow, is available at Amazon and Smashwords, along with some of his other work.

One of Bloch's last collections. "The Yougoslaves" is pretty brilliant, in a good assembly, and "A Most Unusual Murder" being in the fifth THE YEAR'S BEST HORROR STORIES, edited by Gerald W. Page, was the most powerful draw for me to pick up the paperback...hey, a new Bloch story...

Like you, I discovered Robert Bloch when I was a teenager. Loved his short stories! Bloch could write horror, mysteries, and SF with equal quality. Very versatile writer!