In honor of the season, Jeanne of the BPL, has dumped her treadmill and is thinking about airports and reading. It is the holiday season, after all. Please welcome back Jeanne today. 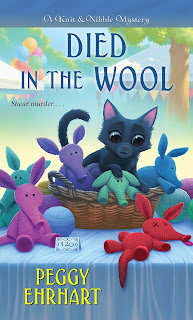 As I may have mentioned, I’m one of those people who feels obligated to finish a book once started.  This occasionally bogs down my reading when I’m in a book I’m not particularly enjoying but I can’t start another until I finish the first.  I’m working on that and hope to be able to abandon books soon. Well, some books, anyways.

In an airport I will read almost anything—I add the qualifier only because someday I might find something I wouldn’t read, but haven’t so far—so I tend to put “maybe” books in my travel bag, certain that I’ll read them no matter what.

This time around I had Peggy Ehrhart’s Died in the Wool, the second in the Knit and Nibble series.  I had read the first one, Murder, She Knit and thought it had promise.  The setup is that a group of folks get together once a week for knitting sessions and a snack, giving the author a chance to offer tips and recipes.  The main character is Pamela, a widow with a college student daughter who works as an editor for a fiber arts magazine. The knitting group is mostly female, although there is a grumpy male lawyer who has taken up knitting on the advice of his doctor as a way to handle stress.  This time around the knitters have knitted aardvarks to sell as a fundraiser for the local high school sports program.  Things are going quite well until a dead body turns up, with one of the knitted aardvarks on his chest.  As per usual, the victim had any number of people wishing him ill so there’s a good pool of suspects.  Pamela and the other knitters are drawn in because of the knitted aardvark and must solve the mystery to clear their names.
I had actually picked this one up before the trip, read a bit, put it down, and repeated.  I like Pamela very much:  she’s generally calm and collected, a steadying influence for the group.   Catrina the cat is appropriately adorable, and there is a whiff of romance in the air with the distinguishably handsome man next door, even if Pamela denies it.  I enjoyed the bits about the fiber arts articles she was working on for the magazine. However, for me the pacing was off: after I put the book down, there was no compelling reason to pick it back up again. Much time was spent preparing meals, for example, with no progress in any of the plot threads.  I also had trouble believing that the whole town would turn against the knitters because of the aardvark toy found with the body.  It served as an excuse for Pamela and best friend Bettina to investigate, but for me that reaching and an unneeded distraction.

The writing itself is enjoyable and as indicated, I like many of the characters.  I just needed for a little more to be going on to entice me to read “just one more chapter.”

There are two more books in the series coming out in 2019. I’ll certainly pick up Knit One, Die Two and see how it goes from there.