Friday once again and today there is another classic review from Barry Ergang. After you read the review and check out the full list of reading suggestions over at Todd Mason’s Sweet Freedom blog, make sure you check out Barry’s new book over on Amazon. 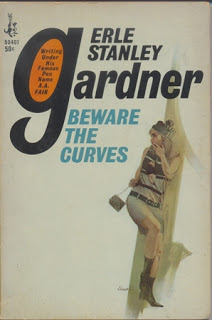 Claiming he’s a writer, John Dittmar Ansel hires L.A. private investigators Donald Lam and Bertha Cool to find a man whose first name is Karl, whose last name he can’t remember, and who came from a town called Citrus Grove, a suburb of Santa Ana. Ansel says he met the man in Paris six years earlier, wants to locate him because Karl gave him a terrific idea for a story, and wants to acquire the exclusive rights to it.

They agree to take the job, Lam instinctively knowing but not telling Ansel that he realizes his assertion is false, that there’s more to it than finding someone to obtain a plot for a novel. It takes no time at all for Lam to discover that Karl is one Karl Carver Endicott, who was murdered six years earlier by a person or persons unknown. On the night it happened, however, a cabdriver dropped off a fare at Endicott’s home shortly before the time of death, a fare whose description matches that of Ansel’s.

And so begins a lean, brisk, appropriately-titled mystery novel by Erle Stanley Gardner writing under what is probably his most recognizable pseudonym. The story involves a love affair, revenge, zoning ordinances, political chicanery, and a murder trial resolved by some nifty legal surprises. The biggest difference between this and other books in this and the author’s Perry Mason series is the absence of the typical Gardner whodunit finale: the explanation of how the sleuth(s) deduced who the murderer is from clues shown to the reader. 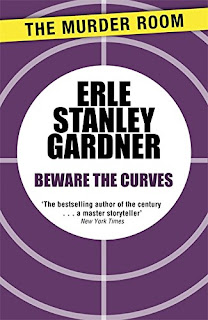 Observation: the author has a predilection for supplying some of the male characters with middle names and recognizing them throughout—e.g., the aforementioned John Dittmar Ansel and Karl Carver Endicott, along with Cooper Franklin Hale and Charles Franklin Taber. (I wonder if Gardner noticed he gave two different people the same middle name.)

Nitpick (behave, reader, and refraining from supplying a rhyme to this category!): Asked during trial examination how she smuggled a .38 caliber revolver into Endicott’s home on the night of his murder, Helen Manning says, “In my bra.” Seriously? Nobody noticed and questioned that lopsided breast or, if in between the two of them, that strangely-shaped bulge? Or did Colt back in 1956 invent a malleable and easily-concealable .38 revolver?

Maybe it’s just me—it often is—but I was somewhat confused throughout the book because Donald Lam, despite being as “brainy” as Bertha Cool touts him to clients, frequently comes to conclusions about events that prove to be accurate, yet the reader isn’t told how he reached those conclusions. The resultant of “a legal education,” he advises “up-and-coming” defense attorney Barney Quinn how to handle Ansel’s defense. Eventually I gave up fretting about it and just coasted along in the name of fictional license for a very entertaining ride. I recommend that others do the same.

I really like the Cool-Lam series. Donald Lam, if I remember, is a disbarred lawyer who once told a client how to legally get away with murder. As far as reaching conclusions without the reader being told how, Nero Wolfe seems to have made a career of it.

I think you're right about Lam, Jerry. And I absolutely agree with you about the Nero Wolfe series. Much as I enjoyed the majority of them, most of the novels and novelettes were not fair-play mysteries, Wolfe "intuiting" solutions rather than deducing them from clues shown to the reader.

If I recall correctly, in the first of the series THE BIGGER THEY COME, Lam tries out along his "how to get away with murder" plan in service to a client, and successfully uses a modification of it. (It mostly involves corssing state lines and arguments over legal jurisprudence.)