I remind you today of the eBook, Eight Adventures of Sherlock Holmes by Bill Crider. 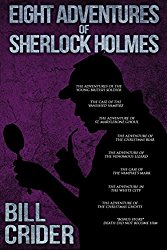 The eight short stories in the Eight Adventures of Sherlock Holmes appeared before in various anthologies over the years from 1987 as recently as 2009. Collected in one book and published by Gordian Knott, an imprint of Crossroad Press, these tales quickly pull the reader in to the world originally created by Arthur Conan Doyle. Mr. Bill Crider’s work so closely resembles the original author it is very easy to forget who wrote these eight tales. Many folks try to imitate the original and miss. M. Crider does so with ease in tales that easily could be part of the Sherlock canon.

“The Adventure of the Young British Solider” opens the book with a tale where Watson, many years later, writes about a previously untold story that happened during 1884. A highly personal that begins on a very cold night in early December. Watson is thinking of what happened to him in Afghanistan after those memories are triggered by a certain poem. A certain fellow soldier, an orderly, saved Watson’s life that day. His name was Edward Murray and Watson totally lost touch with him after the incident. Only days later his wife will appear on their doorstep seeking their help.

It is the spring of 1887 and upon their return to London Holmes has become bored and depressed. Such a mood is very dangerous for an addict and Watson is very worried as “The Case of the Vanished Vampire” begins. Sherlock Holmes thinks the whole idea of vampires is utter and complete nonsense, but his visitors, Bram Stoker and Dr. Abraham Van Helsing, seek to convince him otherwise. They claim to have killed one here in London. They are not sure they killed it correctly in the pressure of the moment. According to them, it escaped and is probably out there in London converting others to its gory cause. They want to find the creature this night, before it feeds again, and they want the help of Watson and Holmes.

The supernatural is also a major part of the next story titled “The Adventure of the St. Marylebone Ghoul.” According to the newspaper, a creature of some sort is at the St. Marylebone cemetery causing unspeakable horrors. They are discussing the situation when the night caretaker at the cemetery, Benjamin Swaraj, arrives seeking their help.

Holmes is not a fan of Christmas and the carolers in the streets outside 22B Baker Street are not going to change his mind. He’s bored and Watson is well aware what that can mean. Fortunately, a client appears this night two nights before Christmas in the form of a Mr. Oscar Wilde. Mr. Wilde needs Holmes help as he believes someone is trying to kill him and he thinks he knows the suspects.

Years later, as Watson nears the end of his life, he thinks about the many events involving Sherlock that he recorded over the years for posterity. He also considers the events that before now he did not have the strength to detail. One such case is “The Adventure of the Venomous Lizard.” On a cold and sometimes treacherous winter night, Holmes has spotted a man he perceives to be desperate headed their way. Upon his arrival, they hear his name and his reason for his desperation.

While Holmes did not like to clean, he especially liked to cook breakfast, which was his favorite meal. Over a morning repast, he slowly pulls out of Watson what is bothering him in “The Case of the Vampire’s Mark.” Once Watson confesses all and they have dealt with that, they are ready for their visitor Abraham Stoker when he arrives. He brings news of a child that bears the neck bite marks of vampire and requests their help.

Sharing the name of Holmes with the man going by the moniker H. H. Holmes, known for hideous crimes, was bad enough, but having been in close proximity to him with no knowledge of what he was doing bothers Sherlock a lot more. Buffalo Bills’ Wild West Show was in Chicago at the time they were there and they were able to spend time with Colonel Cody himself. That was a good thing as he needed their help. What happened is detailed in the tale, “The Adventure in the White City.”

It is Dec. 22nd as “The Adventure of the Christmas Ghosts” begins. Franklin Scrooge, great nephew of Ebenezer Scrooge, is in quite a state when he arrives at 221B Baker Street. A ghost, a family legacy, and more are at stake and Franklin Scrooge needs their help.

A bonus story, “Death Did Not Become Him” by Patricia Lee Macomber and David Niall Wilson brings the book to a close. In this one, Watson goes to 221B Baker Street late one night desperately seeking his help. Watson has had his own visitors earlier this night and was greatly disturbed by them in this Lovecraft style tale. While Sherlockian in style, this short story is jarring when compared to the tales of Mr Crider featured in the book. It strikes a totally different style and tone and does not compare at all well to the previous stories.

I picked this up to read and review back in June using monies in my Amazon Associate account.

This sounds like fun. And a great review, Kevin.

You can seldom go wrong with Sherlock Holmes and you can never go wrong with Bill Crider. This one belongs on everyone's "shelf" of e-books.