It used to be that I could get a lot of stuff done despite going to the hospital several times a week and hanging out there for hours on end and doing everything else that needed to be done. These days I often just barely get through the day as it is. A simple excursion out from the home exhausts me for days afterwards. Then there is the whole grief thing. So, again this week, things got away from me which is why you have another repeat review today as I participate in Short Story Wednesday. This anthology review originally appeared in May 2016. 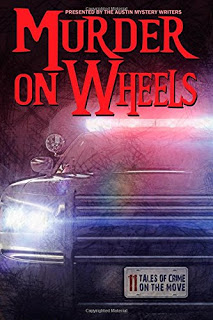 Murder On Wheels: Eleven Tales Of Crime On The Move features short stories where various wheeled modes of transportation past and present serve as a key part of each tale. The tales come from six authors known as the “Austin Mystery Writers” as well as two award winning authors outside the group, Earl Staggs and Reavis Z. Wortham. Edited by Ramona DeFelice Long, the short stories that follow a brief introduction by Kaye George feature a lot of variety in style and complexity

The stranger in town has quite the effect on people. While the men see him as trouble, that same quality is a serious attraction for the fairer sex. That is especially for Rosemary, a fifteen year old looking for a way out of her small town life. Whether or not Campbell Reed is the answer to her dreams is the question in “A Nice Set Of Wheels” by Kathy Waller.

Running moonshine has gone on for decades in the bottom lands of northeast Texas. In “Family Business” by Reavis Z. Wortham illegal liquor has paid the bills as well as caused a lot of problems and heartache. It is the business of the Caissen family and comes with a cost.

Fourteen year old stowaway Tim Brooks thought he would hide on the merchant ship until it arrived in port in Charleston. He picked the vessel Rota Fortunae to hide aboard and that was a serious mistake in this tale of the same name by V. P. Chandler. There is a secret in her hold and one that can’t be explained easily. Out of all the tales in the book this one of adventure, and the mystical was my personal favorite.

It is just after World War II in Hollywood as “Mome Rath, My Sweet” by Gale Albright begins. Private Investigator Grimm has a major problem as Joey Dormouse is dead and Grimm is being blamed.  He should have known the woman billing herself as “Miss Wonderland” who claimed she wanted nothing more than her sister found would be nothing but trouble. After all, Mome Rath is the biggest gangster on the west coast and more famous in all the wrong ways than Al Capone.

The route from Knoxville to D. C. is usually simple enough. The bus is one of those jumbo buses that have two levels. People take the ride, look at the scenery, and have fun. A difficult passenger can change things in “The Wheels On The Bus Go Round And Round” by Kaye George. 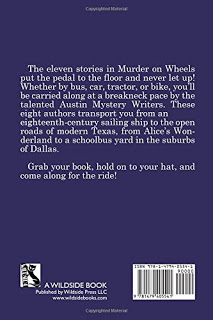 As the rest of the family has repeatedly pointed out, Mary should have never married her Italian husband, Marco. Her family is Irish and there are cultural issues. Then there is his behavior and his insistence on joining the family business in “Buon Viaggio” by Laura Oles.

Faye and her husband, Fred, are at opposite sides in their marriage. He loves riding his bicycles and is all about fitness. He now even wants to go vegan. Faye understands they have grown older and would prefer they stay home together and be cool and comfortable in their house. In “Aporkalypse Now” by Gale Albright the situation is definitely not a bicycle built for two.

Family stress also takes a major role in “Have A Nice Trip” also by Kaye George. Prissy has a difficult, to say the least, mother-in-law named Abigail. While Prissy’s husband, Trey, is aware and agrees they should go on their long delayed honey moon, one wonders if he truly understands Prissy’s needs.

There is an old adage about how one should write what one knows. Earl Staggs knows all about driving school buses. One hopes he does not truly know about dead men on school buses. In his story “Dead Man On A School Bus” being Police Chief in the suburb of Southlake was supposed to an easy gig after thirty years of hard work on the police force over in Fort Worth. The chief has seen a lot of dead bodies, but the one found early this morning on a school bus is a new experience.

It is not a good thing when one walks into the kitchen and finds elderly Mom stirring in ground glass in the lemon meringue pie filling. Something has to be done to make sure Mom does not get thrown into prison in “Hell On Wheels” by Kathy Walker. The family has to have a plan and that means they have to work together.

Billy Ray Bryant always has one thing going wrong or another and needs a favor from Red Clark. Such is the case in “Red’s White F-150 Blues” by Scott Montgomery. Billy needs to hide his truck in Red’s garage to keep it away from the local repo man, Jerry Coonts. Red has been married long enough to know that the coming argument with his wife Britney over hiding the truck will be shorter if the dead is already done before she gets home.

A two page biography of each author brings the book to a close.

Slipping back and forth in time and set in various locations in Texas and elsewhere the eleven tales in this book are all good ones. Some are more adventure orientated than straight mystery and at least a couple are very noir like in their situations. Murder On Wheels: Eleven Tales Of Crime On The Move is a solidly good anthology from eight talented authors and one that is well worth your time.

Murder On Wheels: Eleven Tales Of Crime On The Move

Material supplied by the publisher some time ago in exchange for my objective review.

It's a good theme for an anthology. I am trying to remember stories I have written set on the road. There is one set on a bus, and one with a woman running away from PA to FL, but I can't think of many more.

It is. I think there were plans for a second book, but, I don’t think it ever happened.