Friday means Friday’s Forgotten Books with Patti Abbott. Patti has declared today to be in honor of Ross Macdonald. The list will be here later today. In the meantime, check out Patrick Ohl’s review of The Drowning Pool below…

When Maude Slocum walks into Lew Archer’s office, it looks like another typical case. She’s intercepted a nasty letter that was intended for her husband’s eyes—one that would cast more than a shadow of doubt on her fidelity as a wife. As it happens, her husband James will be a very rich man one day (when his mother dies) and she isn’t particularly keen on going through divorce proceedings. Plus, there’s a child to consider: Maude’s daughter Cathy. Maude went through a divorce as a child and doesn’t want Cathy to experience the same things.

And so Lew Archer gets ready to investigate. He rides to the scene but Death hitches a ride on the way, and very soon a body is discovered. The multimillionaire matriarch of the Slocum family, who kept rule over her son and his family with an iron fist, is found dead. She’s been drowned in the swimming pool. But was it an accident? Did she simply slip? Or was it murder? 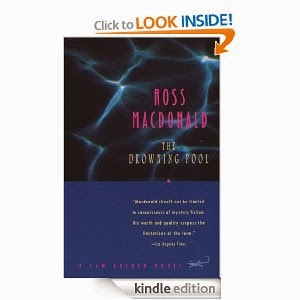 Well, it’s a mystery novel and Mrs. Slocum was a multimillionaire, so you do the math. What surprised me about this book is that although it is very much written in the Chandler mould of hardboiled mysteries, it is still a quintessential Ross Macdonald novel. We have a bickering family, the loss of a parent/grand-parent, a child resenting her mother (while worshiping her father)… all these things threaten to tear a family apart. (Sometimes, Lew Archer seems like more of a family therapist than a detective.)

The characters, as usual for Macdonald, are wonderful. They are all superbly realised. The elderly Mrs. Slocum is not simply a cackling old witch (which is always a danger with characters of her type). However, she really is far too protective of her son James, a man who is weak-willed and spineless. He depends on others and even though his relationship with Maude is a shambles, he has no idea what he would do if she decided to leave. This, as well as his relationship with an “artsy” sort of man at a local theatre, leads Maude in a fit of frustration to accuse him of being a “fairy”. (The inference is clear.)

This sharp characterization is not limited to the main players. Even such a minor character as the local chief of police is wonderfully drawn out. Sometimes he seems to be a classic thick-headed official who hates everyone else as a matter of course (a.k.a. Raymond Chandler’s favourite kind of cop)… and eventually you find out why he behaves the way he does at times. It’s an incredibly powerful scene. There’s an Italian with a French accent (what kind of geneticist came up with that?) who owns a bar, and even though we only see him for a handful of scenes we feel a certain connection with him.

In fact, there’s only one thing seriously wrong with this book and that’s the plot. It’s odd, seeing how it’s a Ross Macdonald novel. Usually, he stretches things to a point of practically over-plotting. But the first half of the book is very slow—it seems like a novel of character, like a quiet domestic affair that should be solved by Archer’s staying with the Slocum family and investigating things. This slow pace seems just right for the tone of the novel… but in the third act, the book abruptly changes pace and introduces international criminals, gang murder, and everything short of bestiality. In fact, one of the book’s last scenes seems like something directly from a James Bond movie! It’s very jarring, and doesn’t seem at all like Lew Archer’s style.

Add to that the fact that the mystery is simply disappointing. It makes sense— in fact, the solution is perfectly plausible. You don’t doubt the explanation Macdonald gives you— but you do begin doubting whether Lew Archer is human. Because short of omnipotence I have no idea how he tumbled to the solution of the mystery. How did he know Didit did it? Magic, I suppose. You never find out and I couldn’t even make a proper guess.

And although generally speaking detectives who pull conclusions out of a hat annoy me, I can’t say that Lew Archer left me feeling that way. The Drowning Pool is a very well-written book that captures the drama of a murder and the effect it has on a family struggling to keep together. When it focuses on this family, the book is positively poetic. But when it decides to throw in some distracting action-oriented stuff, it stumbles hard. The book reads like Ross Macdonald struggling to throw off Raymond Chandler’s influence on the hardboiled mystery. Much of the time he seems to be succeeding but occasionally, Chandler penetrates through everything and spoils it. It’s a mixed bag—most of it is very Ross Macdonald-like material but by the third act, it feels like the plot has stepped into the alternate dimension of a James Bond book, and the Chandler-like style doesn’t work in all parts of the book. The book has masterpiece potential, but in the end, it is forced to settle for “pretty good” status.


Patrick Ohl ©2013
Patrick Ohl is a 20-year old Canadian crime fiction aficionado who enjoys hobbies such as taxidermy and runs a dilapidated motel in the middle of nowhere alongside his crazed mother. He enjoys relaxing in his subterranean evil lair while watching his favourite hockey team, the Toronto Maple Leafs, and will occasionally make chicken chow mein to die for. His life is accompanied by a soundtrack composed by John Williams, and James Earl Jones provides occasional voice-overs.
Posted by Kevin R. Tipple at 12:30 AM

My thanks to Patrick Ohl for yet another excellent and well done review.

I haven't read this one, so I can't weigh in on the ending. I don't necessarily read someone like Macdonald for the solutions, though.