Sample Sunday-- "Package of Pain" in "Mind Slices: A Collection of New and Previously Published Stories"

Sunday today means a mystery sample from my MIND SLICES short story collection. Previously published in the Spring 2007 edition of Mouth Full Of Bullets the story will hopefully keep readers guessing to the end. I don’t remember now what gave me this twisted little idea……
Package of Pain
Mike Thornstein sat in his truck in front of his own house as a light drizzle coated the windshield.  The package was there again, even though it wasn’t supposed to be.  He had been promised by everyone that it was all over.  The investigation was supposed to have ended months ago.  He had been cleared, publicly exonerated, but nothing changed.

It sat there wrapped in plain brown paper on his stoop.  When they first started showing up every Friday like clockwork, his colleagues had searched for the sender.  Each one had been mailed from a mailbox in Fort Worth.  Television had “Walker,” but all Mike had were bureaucratic bosses who decided the packages weren’t a threat.  When the sender wasn’t identified after a few weeks, manpower and resources were delegated elsewhere.  Mike was still on suspension while awaiting assignment, albeit very unofficially, and the packages were still coming.  Something had to be done to end it.

The windshield wipers slapped across clearing the glass.  Visible again, the package sat there waiting for him.  He turned the engine off and listened to it tick as it cooled.  The glass slowly misted over as the drizzle continued.  The package dissolved from view into globs of water on the glass. Sitting there, watching the mist fall, wasn’t going to solve the problem.

Mike heaved himself out of his old truck and crossed the leaf-strewn yard.  Rain and wind had stripped most of the leaves off the trees ..... 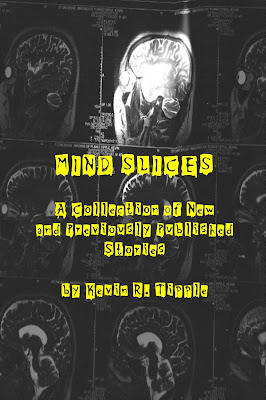 If you liked the above sample, there are 15 more short stories in Mind Slices: A Collection of New and Previously Published Stories.  Some tales lean towards the science fiction side, some lean towards mystery, and almost all of them are suspenseful in some way. Most stories also contain more than one genre. The e-book is currently $2.99 and is available online at:

If you have not yet read the book, I hope you take a chance on it.

I remember this suspenseful story in "Mind Slices" since I read the whole collection. (My review is on Amazon). Highly recommend this book. Buy it, you'll like it.

Thank you, Jan. Much appreciated.