FFB Review: "The Rising of the Moon" by Gladys Mitchell--Reviewed by Patrick Ohl

Friday means Friday’s Forgotten Books with Patti Abbott.  The list will be here later today. In the meantime, set the leftovers aside and put your hands together for the return of Patrick Ohl…

Simon and Keith Innes are two young boys who are supremely excited: the circus is coming to town! It’s true that the festivities will be taking place on a Good Friday, but it only comes once a year and it should be taken advantage of. And in honour of Good Friday, the only reasonable thing to do is to sneak into the circus without paying!

The action begins on Holy Thursday, when the boys sneak out of their house to prepare their route for the following night. But suddenly they see a sinister-looking figure clutching a knife—a knife that looks rather like the knife owned by their elder brother, with whom they live… The next day, a grisly discovery is made—one of the circus people, a tight-rope walker, is found murdered, slashed to death by a Jack-the-Ripper-like murderer… and the bad news is, this is only the beginning. 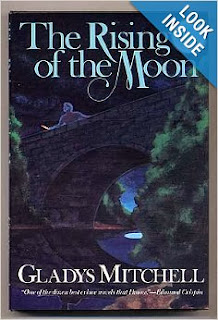 The circus leaves the town without performing, but soon enough, the villagers cower in fear whenever the full moon is up… for it is then that the ripper strikes, killing women and mutilating their bodies. These events are all seen through the eyes of the two young boys—in particular, the narrator is none other than Simon, and the story is not so much a mystery as a coming-of-age-story. The two boys are thrown into the investigation right alongside the local police inspector and the witch-like Mrs. Bradley, who is sent down to investigate the deaths at the express wishes of Scotland Yard. She takes rather a liking to the boys. They deal not only with the murderer, but must also grapple with their mathematics assignments and they must answer a terribly important question: do Catholics only need to go to church once a year, and if so, should they convert?

It’s a good thing that the other elements in this book are so strong, because the mystery is, to be frank, bloody awful. The murderer instantly became obvious to me on page 9—and my edition of the book doesn’t start with page 1—it doesn’t even start with page 5! But it’s not enough that the killer is obvious—oh, no… we must also endeavour to make the ending as confusing and full of loopholes as possible! For instance, there’s a scene where the boys finally get to see the circus. They are told to keep an eye out for this-and-that while there, but of course they have plenty of fun in the meantime. Then they finally spot this-and-that, and they give the prearranged signal. What relevance does this have to the plot? Absolutely none. It’s never referred to again, and in fact, the ending directly contradicts the idea that this scene ever had any point whatsoever.

As for logical loopholes, if you want to see psychology at its most gloriously subjective, look no further than Mrs. Bradley in this book. The police start with a perfectly reasonable notion of what kind of killer they’re looking for, but Mrs. Bradley gives a completely different psychological profile. Who’s right? Why, Mrs. Bradley of course, for the excellent reason that she’s the detective and therefore can never be wrong. What made the police’s initial assumption so unreasonable? Well, Mrs. Bradley said otherwise. What was the significance of the moon? Well… God alone knows. At least I hope so. I wouldn’t be surprised if God was just as puzzled over this moonshine (pun perfectly intended).

All this sounds as though I hate the book… but nothing could be further from the truth. I have brought up all these problems in the book’s plot because I want to get these over with before I reach the end of the review—I’d hate to finish on such a severely negative note! This book is without doubt a masterpiece of writing, but don’t set the bar high on your mystery expectations.

The book’s best success is the writing from the POV of a child. It’s got that perfect mix of childlike innocence and that manner many kids have of wanting to be treated as grown-up. It all rings perfectly genuine. Simon is a wonderful character, and we see him forced to grow up with this murder investigation. We also see the steps he takes to avoid Sunday school and to protect his elder brother when it seems he might be the murderer. All this is most fascinating, and the relationship Simon has with Mrs. Bradley has a curious note of poignancy and tenderness to it. Mrs. Bradley is just as harsh, witch-like, and cackling as ever, but she teaches Simon a thing or two about life and she’s rather like a mother-figure to him.

The atmosphere meanwhile is brilliant. Just… brilliant. The slowly increasing fear and terror of the villagers… the way the tension is ratcheted up notch by notch… that final chase in the moonlight… everything adds up beautifully, and it’s hard to describe the overall effect. I’m at a loss of words.

So overall, I tend to agree that The Rising of the Moon is a masterpiece from the Golden Age of Detective Fiction… but you have to keep an open mind when the conclusion rolls around, because it is among the most ridiculous, plot-hole-ridden endings in detective fiction. It’s up to you to decide how you will take the ending. Maybe you will decide, as I did, that it doesn’t affect the quality of the book enough to lower it. Maybe you will decide to write your local Member of Parliament to protest. (It's not like they're doing anything important.) But if you’re willing to swallow the ending, you will see that the book is a very worthwhile experience!

Patrick Ohl is a 20-year old Canadian crime fiction aficionado who enjoys hobbies such as taxidermy and runs a dilapidated motel in the middle of nowhere alongside his crazed mother. He enjoys relaxing in his subterranean evil lair while watching his favourite hockey team, the Toronto Maple Leafs, and will occasionally make chicken chow mein to die for. His life is accompanied by a soundtrack composed by John Williams, and James Earl Jones provides occasional voice-overs.
Posted by Kevin R. Tipple at 12:30 AM