Kindle Freebie: "One Thousand Dollars A Word" by Lawrence Block

The description on the Amazon page... 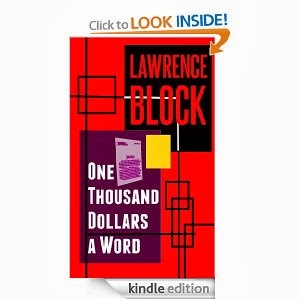 It's not hard to figure out where "One Thousand Dollars a Word" came from. The situation it describes was authentic enough, although I never heard of anyone who found the protagonist's particular solution to this dilemma.

Back in the first half of the twentieth century, and even well into the 1950s, a prolific writer could make a respectable living writing short fiction for magazines. There was a great profusion of markets; the better ones paid generously, and even the markets of last resort would put food on a writer's table.

TV and paperback books changed everything. Magazines folded left and right, not to mention right and left. The ones that survived were hardly thriving. They had to hold the line, and they did so by making their payment to writers the world's sole hedge against inflation. Everything else went up in price; a writer's words stayed where they were, or drifted gently downward. Some writers crossed the street to write paperback novels, or crossed the country to write television shows. But there were others who were born to write short stories, and that left them high and dry, and even dry and high.

Thus this story. It was, as you might imagine, hugely popular among writers; Whenever our paths crossed, one colleague simply intoned, "One. Thousand. Dollars. A. Word," sighed, and walked off shaking his head. It's been anthologized from time to time over the years, and I included it in Sometimes They Bite as well as my omnibus collection, Enough Rope.

Its first appearance, ironically enough, was in Alfred Hitchcock's Mystery Magazine in 1978, where it earned its creator the munificent sum of 5¢ a word.


As part of his "Orange Wednesday" program the short story is free and availble here at  One Thousand Dollars a Word
Posted by Kevin R. Tipple at 10:30 AM

Just spreading the word after I picked up my free copy.