Guest Reviewer Caroline Clemmons Reviews: "Out Of The Night" by Geri Foster

It has been quite some time since author Caroline Clemmons last reviewed a book here. Please welcome back Caroline to the blog.

Geri Foster’s OUT OF THE NIGHT is a thriller/romantic suspense that will keep readers turning the pages until the last word. This intricate plot is one that both men and women will find fascinating. The third book of Ms. Foster’s Falcon Securities series, each is a stand-alone book. Many authors say books in their series are stand alone, but in this case the statement is true. Nevertheless, readers will be hungry to read each one. 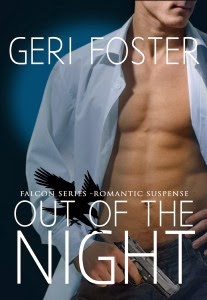 Falcon Securities is an agency headed by Frank Hamilton and answers only to the President of the United States. Tony Archuletta is a Falcon Securities agent being held in the infamous Lubyanka Prison, where experimental drugs were used to break him in interrogation. The doctor who administered the drugs overdosed him and wiped out Tony’s memory. Will it return? No one knows.

Abby Williams is an investigative reporter who still loves Tony even after he broke off their relationship. Poor Abby is in the wrong place at the right time and is given the assignment to impersonate a Russian guard and extract Tony from the prison. With a few scares, she completes the assignment. She doesn’t realize Tony has lost his memory until he tries to kill her. He has no idea who she is and believes she has taken him out of prison to shoot him.

Bit by bit, Tony’s memory kicks in, but never enough. His assignment had been to rescue the CIA agent, Joe Mitchell, who knows the identity and location of all undercover CIA agents, before the man can be broken. If Joe talks, he would endanger every agent and compromise years of work. Frank Hamilton believes Joe will kill himself rather than reveal what he knows, and the rush is to rescue him before either event happens.

Rushing across Russian and other countries, each step of the way presents another dangerous confrontation. Tony doesn’t understand why Abby’s presence comforts him, but he asks her to remain with him on his race to free Joe. Other Falcon agents lend their assistance, but Tony is the only one with the key to Joe’s location—if his memory returns.

This book has more twists and turns than a switchback road. Subtle romantic moments add dimension. Secondary characters add an interesting mix and the characters are very well developed. A highly energized ending is one you'll remember long after you've finished reading OUT OF THE NIGHT. If you like Robert Ludlum, Tom Clancy, and Dan Brown, you will enjoy reading Geri Foster’s OUT OF THE NIGHT and her other Falcon books, OUT OF THE DARK and OUT OF THE SHADOWS. Watch for more of this series in the future.

Thanks for posting my review, Kevin. Geri is a wonderful author as well as a nice person.

Thank you for sending it. Much appreciated.

Geri read it but said her computer locked her out of commenting on blogs today. She appreciated you running the review, though.

She must learn to control her computer. :))

Great review Caroline. I have this book on my Kindle to be read.