FFB Review: "TERROR IS MY TRADE" (1958) by Stephen Marlowe (Reviewed by Barry Ergang)

Another Friday and Barry Ergang is back with another review for Friday’s Forgotten Books hosted by Patti Abbott. This week he reviews Terror Is My Trade by Stephen Marlowe. The work of Stephen Marlowe is a frequent topic of Barry’s reviews. Among others here on the blog, Barry has reviewed Killers Are My Meat and Drum Beat-Dominique.

TERROR IS MY TRADE (1958) by Stephen Marlowe

D.C.-based private detective Chester Drum has been hired by former Congressman Wade Rumbough as the latter’s bodyguard on a trip to Europe on the luxury liner Queen Victoria. Rumbough, who is the head of the Emergency Mission to the NATO Powers, has with him his daughter Helen, his brother Rufus, and Dr. Eve McGivern, who is aboard ostensibly as a companion for Helen. 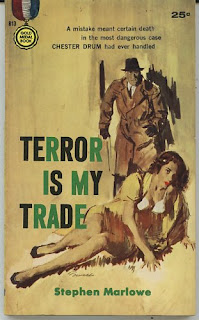 Also on board are Gino Garda, a racketeer who has been deported from the United States, whose career goes back to the days of Prohibition and Al Capone, and his friend Frank Caretti. Rumbough knew Garda years earlier as “a friend of a friend.” Garda is famous for flying wherever he has to go, so Drum wonders if his decision to sail back to Europe has anything to do with Rumbough and the diplomatic project he’s undertaken.

It’s finally decided that Drum’s role as bodyguard could be politically damaging to the nature of Rumbough’s mission, so the latter says he’ll pay Drum for his time and for his passage home from England once they dock. But while still aboard the Queen Victoria, Drum meets a State Department official named Paul Bible. After a drink and a conversation, they go their separate ways. But that night, while the ship is hosting a fancy dress ball, Drum has a brutal confrontation with Frank Caretti in Gino Garda’s stateroom. Later he finds a note from Bible that has been slipped under his own stateroom door: “I must see you tonight. I have to see you. I’ll be looking for you every fifteen minutes on the starboard boat deck starting at nine.”

After some delay, Drum keeps the appointment—just in time to witness Bible’s murder at the hands of someone dressed in the costume of a Buckingham Palace Guard, but unable to identify, let alone capture, him or her. The one certainty? He knows he won’t be returning to the States anytime soon; he’s determined to find out which of the ship’s passengers killed Bible and threw him and the murder weapon overboard.

But this is the bare beginning of a very short (159 pages in the original Fawcett paperback edition), fast-paced, action-packed and intricately-plotted novel. Intricate to the point of occasionally being confusing because of its brevity, I might add, as Drum—a refreshingly fallible P.I., as he admits throughout—goes to work for Gino Garda with official approval, digs into and uncovers murky Rumbough family secrets, and penetrates the Insurance, the mysterious organization that serves as the protector for international smugglers of Swiss watch parts, diamonds, and drugs.

A well-written novel of its type, as this reader has come to expect from this author since said reader first discovered said author when the former was a teen, it’s one that some might take the time to parse about plot complications and others will just cruise along for an entertaining ride. Neither is likely to be disappointed. But I recommend the latter’s approach.

I've read two or three Chester Drum books and enjoyed them, but this one os new to me. Think I'll try it.

I'm a fan of the Chester Drum series and all of Stephen Marowe's work. Hopefully, STARK HOUSE will reprint these wonderful books.

Mysterious Press has the Chester Drum series available in e-book form, including TERROR IS MY TRADE: http://mysteriouspress.com/products/search/?SearchTerm=stephen+marlowe&ign__submit.x=14&ign__submit.y=6&pg=2