When one is a bounty hunter in the Old West, one is used to the sound of gunfire. The bark of rifles and pistols is a frequent experience. One that is often followed being in the thick of the flying lead. On this sunny day in the middle of nowhere the sound of gunfire coming over the small ridge to the west is totally unexpected. It can’t be ignored either. Bounty Hunter Bodie Kendrick’s trip to the town of Lowdown in the foothills of the Dos Cabezos Mountains will have to wait. 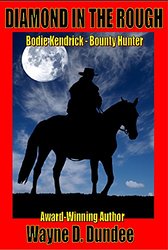 Once Kendrick gets to the ridgeline and can see down the slope on the other side, he can also see that a stage is under attack. The stage is stopped thanks to the death of two lead horses. It is also clear that the shotgun guard is dead. The driver and at least one person inside the coach are pinned down and shooting back at four ambushers.

Bodie Kendrick intervenes and manages to turn away the ambushers saving the lives of all still living. He also learns of a mystery and quite a lot more in Diamond In The Rough: Bodie Kendrick Bounty Hunter Book 3.  Beyond the possible sighting of the wanted man, the mystery involving the passengers on the stage might very well tie into his original trip to Lowdown.

Third in the series behind Hard Trail To Socorro and Rio Matanza, the Bodie Kendrick character is pretty much fleshed out at this point. He’s a man’s man who does what needs to be done. He isn’t above spending his free time in brothels or saloons, but is most comfortable out on the trail alone in the wilderness. He does not look to avoid problems and such is the case here as he easily could have ignored the distant gunfire and gone about his business. Diamond In The Rough by Wayne D. Dundee is another very good western read.

According to the Amazon overlords, I picked this up in early September 2014. I have no idea now if it was a free read or one that I picked up by way of funds in my Amazon Associate account. I suspect the latter.